Day in the Life of Noah Piugattuk 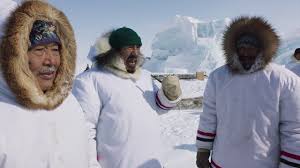 Isuma Distribution International is happy to announce that Zacharias Kunuk’s latest feature, One Day in the Life of Noah Piugattuk, was awarded "Best Canadian Film" at the 2019 Vancouver International Film Festival.

One Day in the Life of Noah Piugattuk is screening twice this week at VIFF:

Shot on location in north Baffin Island, One Day in the Life of Noah Piugattuk stars Apayata Kotierk (Atanarjuat The Fast Runner), Kim Bodnia (Pusher, Killing Eve), and Benjamin Kunuk (Maliglutit/Searchers). Producer Jonathan Frantz will be in attendance at the October 7 screening.

Synopsis of One Day in the Life of Noah Piugattuk

Kapuivik, north Baffin Island, 1961. Noah Piugattuk’s nomadic Inuit band live and hunt by dogteam, just as his ancestors did when he was born in 1900. When the white man known as Boss arrives in camp, what appears as a chance meeting soon opens up the prospect of momentous change.

Born at Kapuivik, I was three years-old the day our story took place. Most of our actors are related to characters in the film. When Piugattuk was ordered off our land into the government settlement of Igloolik I was forced to move too, separated from my culture, numbered E5-1263 as my Eskimo ID Number and schooled in English to get a job. Now there’s a multinational iron mine where we used to live and hunt. I decided to be a filmmaker to tell stories like this one, in our own language from the Inuit side, about who we were and what happened to us. This film employs elders and youth, keeps our language alive and shows a side of Canadian history that most Canadians have never heard about.