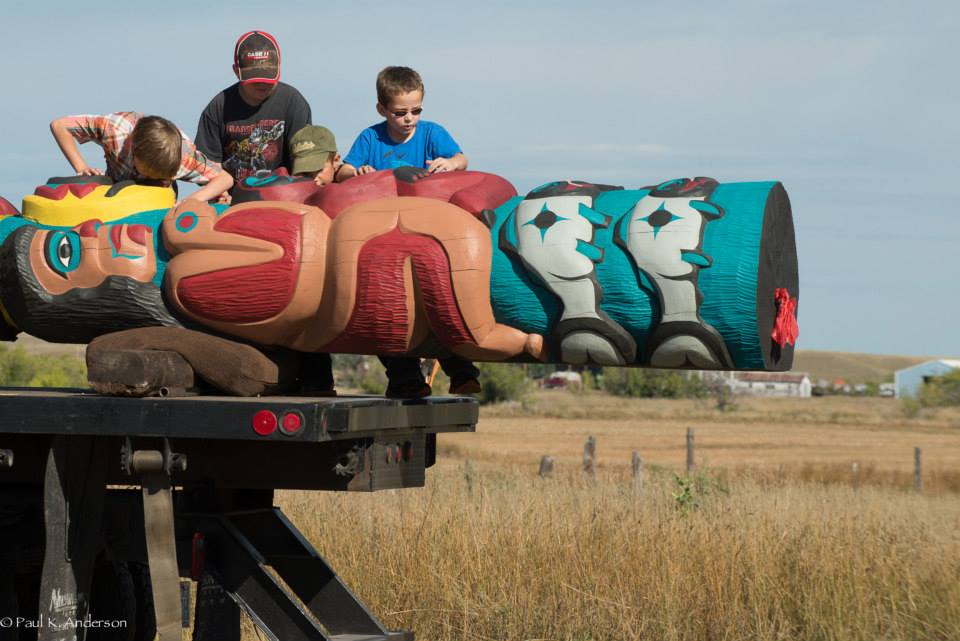 A group from Tsleil-Waututh Nation is helping bring the second of two healing totem poles that mark both ends of Kinder Morgan's Trans Mountain Pipeline.

The first pole was erected last year in Tsleil-Waututh territory at the terminus of the oil pipeline that brings bitumen from northern Alberta to tankers in Burrard Inlet. A second pole is now on a journey from the carvers in Lummi, Washington to the Beaver Lake Cree at the other end of the pipeline, with many destinations in between, including Metro Vancouver.

The 2014 totem pole helps honour, unite and empower communities in the destructive path of coal and oil exports, from the American heartland to the Pacific Coast and from Alberta, Canada, to British Columbia. Beginning in late August 2014, the 20-foot-long totem, made from western red cedar, will travel 10,00 Kms along proposed export routes, from the Powder River Basin west to the Salish Sea and back east to the Alberta tar sands. At community events in locations including South Dakota, Montana, Washington, British Columbia, and Alberta, Canada, all will be invited to experience and help carry the message by seeing and touching this indigenous, activist art form. The totem speaks to the heart of the matter and the moral conscience of culturally diverse communities.

Along with the totem pole, the Lummi travel with a mural that gives expression to the trip’s intentions. Acclaimed muralist Melanie Schambach guided the mural’s creation, working with Coast Salish artists in partnership with youth and elders from potentially impacted communities. The mural literally paints the picture of the journey’s message and intentions. It travels alongside the totem pole and expresses our shared responsibility to steward the land and waters for future generations.

More background on the #TotemPoleJourney:
- In protest to dirty and dangerous coal and tarsands proposals, members of the Lummi Community will embark on a journey, Our Shared Responsibility-the Land, the Waters, the People, to empower and inform communities all along fossil fuel transport routes, and bring a new level of understanding and engagement to successfully oppose these shortsighted proposals.
- A totem pole, created by the Lummi Nation House of Tears Carvers and one of the oldest forms of North American storytelling, will join the journey to remind us of our place within nature, our responsibility to future generations, and our connections to each other and to our communities.
- At the ceremony, the totem pole will be blessed by tribal elders, by community leaders and YOU! The Lummi ask for blessing and protection of sacred lands and treaty rights, including their own ancestral village and treaty fishing waters at Cherry Point, WA.
- In the testimony of Master Carver Jewell James, the totem itself is not sacred -- it is only when it is touched and shared by many communities standing together that the totem becomes a lasting part of our memories and a symbol of our resistance.
- So please join us in this unique indigenous event and let the Lummi community know that we stand united in the fight against Tar Sands expansion in our shared responsibility to protect the land, the waters, and the people.