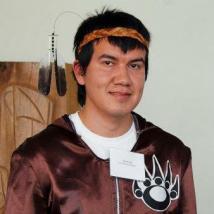 Indigenous nation: Comeakin of Cowichan Tribes. Joining the Squamish Ocean Canoe Family in 2009 introduced Bryan (Ancestral name: Twowihwuluq) to fundraising.  In the summer of 2010, he received a Hawaiian name in the Makah nation: Ka wa’a koa. In the summer of 2011, he joined the River Spirit Canoe Club (Stepaqteleq, Skwah). He competes and fundraises in the Pacific Northwest every spring/summer. He was appointed to the Sto:lo Youth Treaty Council from 2011 to 2012. From 2013 to 2015 he worked at Covenant House processing all donations. He went on to further his education in accounting. In the summer of 2016, he was selected as the Cultural and Accounting summer student assistant at the Circle of Eagles Lodge Society. In the fall of 2016, he began studying accounting at Langara and earned prestigious awards from the New Relationship Trust Foundation, Indspired and the Irving K. Barber Foundation. Currently, Bryan is working as a freelance Accounting Coordinator specializing in accounts receivable, accounts payable, reconciliation, audits, and payroll. Bryan strives to preserve Salish culture by sharing financial analytics from non-profit and corporate sectors.