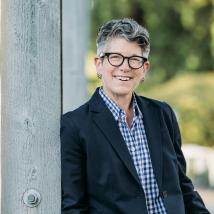 Emet Davis (she/they) currently resides in Vancouver on the unceded Territories of the xʷməθkʷəy̓əm, Sḵwx̱wú7mesh and səlilwətaɬ peoples.

Emet has been working and consulting for progressive labour organizations, non-profits and businesses for more than three decades to advance an array of social justice causes. She is currently the Programs and Partnerships Director with the Ronald S. Roadburg Foundation overseeing a diverse portfolio of issues, including the climate crisis. Previously, as Director of Research and Interactive Services with the BC General Employees Union (BCGEU), the union and Wilderness Committee frequently partnered on environmental public policy research and campaigns. Earlier, as Executive Director of BC Citizens for Public Power, Emet collaborated with the Wilderness Committee and other ENGOs to stop the BC Liberal government’s privatization of the province’s electricity sector through the development of hundreds of privately owned river diversion projects. On off-hours, Emet can be found walking at Jericho beach, enjoying Vancouver’s arts scene and keeping up with the antics of her two Sphynx cats.