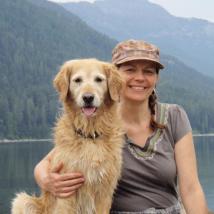 Paula's friendship with the Wilderness Committee began in 2001 when she joined them to tour Canada with former Wilderness Committee Policy Director, Gwen Barlee.  Together, with a three story tall inflatable grizzly bear and an inflatable marmot in tow, they rallied public support nationally for federal endangered species legislation (the legislation passed). In 2002, Paula left the Wilderness Committee to join the BC SPCA where she could combine her background as an educator with her passion for animal welfare. As the BC SPCA’s humane education manager, Paula engages universities and schools around the province developing and implementing animal welfare curricula.  Paula also oversees the SPCA’s extensive summer camp program that engages over a thousand children every year around the province.