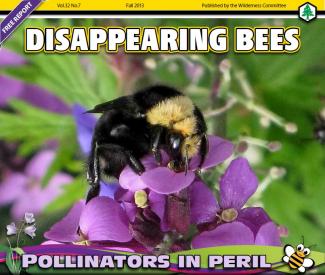 The term "busy as a bee" takes on new meaning when you realize that for just one pound of white clover honey, hardworking honey bees must make over 17,000 foraging trips to 8.7 million flowers. Pollinators like honey bees not only work hard, they are the backbone of a healthy agriculture system, contribute billions to our economy and are responsible for one out of every three bites of food we eat.

Understanding the importance of pollinators is essential because pollinators need our help.

Over the past 20 years, and particularly in the past decade, there has been a startling decline in honey bees, bumble bees and other pollinators around the world. Canada has lost 35 per cent of its honey bee colonies annually for the past three years, and a huge die-off in 2012 led to the loss of 37 million bees in Ontario.

Although loss of habitat, monoculture crops, mites and disease have all played a role in the decline, a deadly and commonly used class of pesticides called neonicotinoids (neo-nicoteen-oids) has been implicated in the frightening drop in pollinator numbers.

Read this paper to: