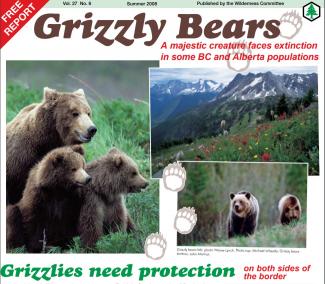 Grizzly bears hold a certain place in our hearts - a revered yet feared beast of up to 375 kg which can stand 6 feet tall and conjures up images of rugged and unspoiled wilderness. A subspecies of brown bear, grizzlies historically ranged from Alaska down to Mexico and as far east as Manitoba. Unfortunately, human fear of the grizzly and encroachment of their habitat has left the grizzly virtually non-existent in Canada's southern provinces outside of British Columbia (BC) and Alberta. The few remaining populations of grizzly that straddle the Canada-US border in BC and Alberta are in trouble, and need our actions to help them recover.