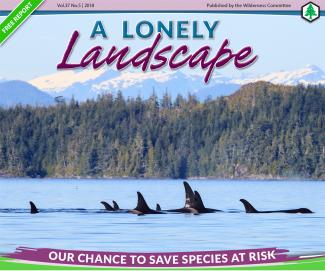 OVERCOMING EXTINCTION — WE’VE DONE IT BEFORE, LET’S DO IT AGAIN

Quack! A single duck bobbed on the calm waves of the Pacific Ocean off the west coast of
Canada, unaware of the two bald eagles eyeing it from a towering fir tree just metres away. I sat up slowly, eyes glued, watching in anticipation; I barely noticed the shadow darting beneath my kayak. A foot away from where my hand gripped the paddle, a curious seal emerged from the dark below.

It made me wonder, what else was down there that I couldn’t see?

Life is all around us, in plain sight or hiding unseen. But if we don’t do something drastic now, we risk losing all the species we treasure. You and I are living through the sixth mass extinction.

In Canada, half of our wildlife species are experiencing population declines. Irreversible damage to our ecosystems lies ahead if we don’t make a change.

If we don’t do something drastic now, we risk losing all the species we treasure.

Not too long ago, we faced another extinction crisis. The iconic bald eagle was nearly wiped out in the U.S. in the 1960s. DDT, a toxic pesticide, was widely used. Everywhere it was, birds of prey, fish and amphibians became fewer and farther between.

At that point in history there were two options — continue down the path of using DDT or ban it. Rachel Carson’s 1962 book Silent Spring described just how grim a future would be without birds, showing us what was at stake. “There was a strange stillness. The birds, for example — where had they gone?“

Thankfully, governments listened to concerned citizens and began to ban DDT in 1972 in the U.S., 1990 in Canada and worldwide for agricultural uses by 2001. As a result, wildlife rebounded and even the bald eagle bounced back from the edge of extinction. The story of DDT gives me hope that when our backs are against the wall, widespread action is possible and communities around the world can work together to overcome even the most difficult challenges.

We have come to realize that we are a part of biodiversity— the network of living things on Earth — and our existence depends on the health of this network. Species protection in today’s world is not as straightforward as banning one pesticide. But if we work together again, we can stop the decline of wildlife.

Steps to save wildlife at risk have been taken. In 1992, with growing awareness of the tie between human existence and the diversity of living things, the world came together to protect our natural life support systems.Over 175 countries, including Canada, signed the Convention on Biological Diversity, an agreement to protect the world’s incredible variety of species. A decade later Canada finally enacted the Species at Risk Act (SARA) to protect wildlife.

Yet despite 15 years of SARA inaction, Canadian species across the country risk extinction more than ever. Read on to find out more about the federal SARA:the good, the bad and the much-needed makeover.