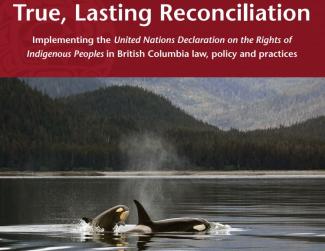 Implementing the United Nations Declaration on the Rights of Indigenous Peoples in British Columbia law, policy and practices

THE IMPLEMENTATION OF THE UNITED NATIONS DECLARATION ON THE RIGHTS OF INDIGENOUS PEOPLES (UN Declaration) is a central political and public policy issue around the world, and more dialogue needs to take place on how the UN Declaration can and should be put into action. This report helps to fill the gap by advancing discussion on the implementation of the UN Declaration in British Columbia. It challenges politicians, officials, advisors, experts and the public to explore a range of avenues about how the UN Declaration can be given meaning on the ground in constructive, impactful and practical ways. Inspiring this report is a strong belief that there exists significant unfinished business to address the legacy of colonization of Indigenous peoples in Canada, and that addressing this legacy requires significant changes to legal and policy frameworks.

This report takes stock of current efforts to implement the UN Declaration in British Columbia, identifies roles and responsibilities in implementation efforts and makes recommendations on actions going forward. There now exists wide agreement in Canadian and British Columbian society that the Calls to Action made by the Truth and Reconciliation Commission (TRC) must be adopted. Fundamental to the TRC’s final report is Call to Action 43:

We call upon the federal, provincial, territorial, and municipal governments to fully adopt and implement the United Nations Declaration on the Rights of Indigenous Peoples as the framework for reconciliation.

This means that one cannot be in support of the TRC Calls to Action without also being in favour of full implementation of the UN Declaration.

This report concludes that implementation of the UN Declaration will involve a diverse and dynamic set of legislative and policy shifts by government; action by Indigenous Nations to rebuild and revitalize their governments, structures and legal systems; and changes in processes and patterns of relations, negotiations and treaty and agreement-making, including a shift from consultation to consent-based decision-making (see box on “Free, Prior and Informed Consent”). Fundamental. to the UN Declaration is an understanding that government must move from a “duty to consult” to a genuine process of obtaining free, prior and informed consent of Indigenous Nations in all matters pertaining to their Title and Rights.

There does not exist, nor can there exist, a “one size fits all” model of Crown-Indigenous relations that is consistent with the UN Declaration, nor is there a single legislative or policy action that will see the UN Declaration reflected on the ground in the life of British Columbians. Iterative actions, which pursue change systematically and build on one another, are required.

The report outlines the work that all groups must do to advance the transformational changes that are needed for full and unqualified implementation of the UN Declaration in this region, where Indigenous Title is unceded and yet Indigenous Rights have been too long marginalized in the daily, ongoing practices of governance. The report outlines foundational principles for implementing the UN Declaration, and then makes a number of wide-ranging recommendations that build upon the Commitment Document that has been signed by the BC government and the First Nations Leadership Council (which comprises the BC Assembly of First Nations, the First Nations Summit and the Union of BC Indian Chiefs). Among this report’s recommendations are the following:

The writing of this report was greatly assisted by an advisory team made up of Don Bain, Michael Byers, Roshan Danesh, Shannon Daub, Maxime Faille, Joe Foy, Andrea Glickman, Paul Joffe, Seth Klein, Eugene Kung, Sheryl Lightfoot, Josh Paterson, Matthew Norris, Jennifer Preston, Joanna Reid, Loralee Sepsey, Rachel Singleton-Polster and Douglas White. Thanks as well to Mary Ellen Turpel-Lafond, to three other anonymous reviewers, the UBCIC Executive (Grand Chief Stewart Phillip, Chief Bob Chamberlin and Kukpi7 Judy Wilson) and the UBCIC Chiefs Council. The UBCIC and CCPA gratefully acknowledge the Law Foundation of British Columbia for their financial support for this project. This report is available under limited copyright protection. You may download, distribute, photocopy, cite or excerpt this document provided it is properly and fully credited and not used for commercial purposes. The opinions and recommendations in this report, and any errors, are those of the publishing organizations and do not necessarily reflect the views of the funders.