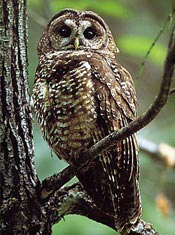 The bird
A beautiful medium-sized bird with a distinctive round face and dark chocolate brown eyes, the Northern spotted owl is found only in the old-growth forests of the pacific northwest of North America. Spotted owls rely on these forests for breeding, foraging, nesting, roosting, temperature regulation and protection from predators.

Ulitizing the open canopy and cool interior that is characteristic of ancient forests, the owl is a stealthy “sit and wait” hunter. At dusk the owl becomes active, perching patiently on a tree branch as it waits to swoop down on unsuspecting prey. Wood rats, mice, voles and flying squirrels make up the majority of their diet although they will eat a tasty reptile or insect on occasion. Exceptionally sharp hearing and excellent vision coupled with “silent” flight, from specially adapted feathers, make them highly proficient hunters.

Although spotted owls are a long-lived species, reaching 16-17 years in the wild, they have a low rate of reproductive success. Mating for life, a pair of owls will typically produce one or two young every other year. Eggs are laid in the spring, usually in old dead trees that provide ideal hollows and cavities as owls do not build their own nests. After 30 days the plain white eggs hatch. Young owls are fluffy, snowy white, voracious eaters and completely dependent upon their parents for food, warmth and protection from predators. While the young owlets mature the male continues to do most of the hunting often “caching” prey in tree branches to be retrieved later. Over the next four to sixth months the young owls start to roost a little further from their parents and work diligently on developing skills as both hunters and fliers. Finally in the early fall, necessary skills mastered, the young owls will set out on their own looking for new territories and a mate.

It is during this perilous teenage “dispersal” stage, where young owls have to navigate through kilometer after kilometer of clearcuts, that juvenile owls often fall victim to starvation or predation by ravens, hawks and even great horned owls. Although adult survival rates are healthy -reaching nearly 96% - mortality rates of juveniles are very high, hovering between 75-85%.

Considered an important indicator species, the health of the spotted owl reflects the health of the old-growth ecosystem in which it lives. In southwestern British Columbia, the only place the spotted owl is found in Canada, over 75 vertebrate (animals with a backbone) live in the same area as the spotted owl. Hiking in the old-growth forests of southwestern British Columbia you can find Rocky Mountain tailed frogs, cougars, cutthroat trout, fishers, white-tailed deer, hairy woodpeckers, black bears, flammulated owls, Northern goshawks, pileated woodpeckers and even the elusive marbled murrelet. However you will also find that 25% of these species, like the spotted owl, are endangered because of loss and fragmentation of their habitat by industrial logging.

In spotted owl habitat, from northern California to southwest British Columbia over 70% of the owls’ old growth habitat has been logged. The very forests that are essential to spotted owls and to so many other old-growth forest dependent species are also valuable to timber companies, and today, because of continued logging in their habitat just 3,000 - 5,000 pairs of spotted owls remain worldwide.

In British Columbia, which is the northern most edge of the spotted owls’ range the situation is even more dire – in 2005 government scientists located less than 25 owls. In 2011 in southwestern BC less than a dozen spotted owls are thought to survive in the wild. Historically scientists estimate that 500 pairs of spotted owls once inhabited the old-growth forests of southwestern British Columbia. However in just under a century, massive and ongoing industrial logging in owl habitat has resulted in a dramatic, precipitous and continuing decline of the Canadian population. In the last decade the spotted owl population has crashed by 70% leading government scientists to predict that the owl will become extinct in Canada in less that a decade unless immediate action is taken to protect the species and stop logging in its habitat.

Unfortunately for the Northern spotted owl and the 500 other endangered species found across Canada protection is unlikely to come from either the federal or provincial government. The province of British Columbia has no endangered species law and is in some years has been the largest logger of spotted owl habitat under its BC Timber Sales Program. In 2003 with just 10 spotted owl sites left in all of British Columbia the government allowed logging in 6 of the last 10 locations.

Federally, the spotted owl is also left to fend for itself under Canada’s weak endangered species legislation – the Species at Risk Act (SARA). Introduced in June of 2003 SARA was supposed to apply to all species at risk wherever they were found in Canada. However in reality, SARA applies only to limited areas of federal jurisdiction, which in British Columbia applies to just 1% of the land base. There are discretionary provisions in SARA including emergency provisions and the soon to be legislated "safety net“ clause which allow the federal government to step in and protect a species if a province is failing to do so. But despite a formal petition by a coalition of environmental groups comprised of the Wilderness Committee, the David Suzuki Foundation, Forest Ethics and the Sierra Club of Canada asking the federal government to step in and stop logging in spotted owl habitat, the federal government is refusing to do so.

In 2011 conservations were seemingly deliver a sliver of hope for the spotted owl when several Wildlife Hatitat Areas were officially designated in the Chilliwack Forest District for the protection of spotted owl habitat. These new WHAs were, according to the BC government, offlimits to commercial logging. But then it was learned that there would be exceptions. For excample, the Chilliwack Valley WHA had over a dozen logging cutblocks proposed.