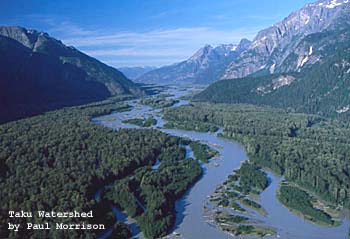 Proposed industrial development in these watersheds – from coalbed methane extraction, to coal mining, mineral mining and hydropower – threaten the future of this wild legacy. Most pressing is a large coal bed methane extraction project proposed by Royal Dutch Shell in the Sacred Headwaters: the shared birthplace of three of these great rivers – the Skeena, Nass and Stikine; as well as several proposed mining projects in the Taku watershed.

Coal mining and coalbed methane extraction would also greatly increase the greenhouse gas emissions which cause global warming. Protecting these watersheds is a very important step in confronting the climate crisis.

To protect all the northwestern BC wild salmon river watersheds from industrial resource extraction, the Wilderness Committee is helping and supporting northern environmental groups and First Nations. You can get involved by helping us to raise awareness with our publications and media campaign. Or you can engage through letter writing, petitioning or coming out to rallies. Make sure the BC government does the right thing and protects these  great northern salmon rivers.

As known by elders of the local Tahltan First Nation, the Sacred Headwaters is the source of three of Canada’s greatest wild salmon rivers – the Skeena, Nass and Stikine. Unfortunately, one of the world’s largest corporations, Royal Dutch Shell, intends to develop a 412,000-hectare coalbed methane extraction operation in the Sacred Headwaters. It plans to drill at least 1,000 gas wells and build a network of roads and pipelines. Such industrial development would fragment the landscape, disrupt wildlife and destroy valuable salmon habitat.

Coalbed methane extraction has never been attempted in a wild-salmon-bearing watershed. Elsewhere, extraction has brought toxic water up to the surface and polluted streams and groundwater. Studies show that extraction can increase erosion, sedimentation, and deplete groundwater aquifers that feed streams.1 Seeping toxins and disruption to these pristine northwest rivers threaten wild salmon populations, other wildlife and the downstream communities in these watersheds.

There is growing opposition among the region’s First Nations and non-First Nations communities to Shell’s drilling plans, as well as an expanding international campaign by environmental groups.

In December 2008, because of huge pressure from First Nations, environmental groups and concerned citizens, the BC government and Royal Dutch Shell agreed to a temporary two year moratorium on the coalbed methane project in the Sacred Headwaters. This allows more land use planning and dialogue between the Tahltan First Nations, Royal Dutch Shell and government, but what is needed is a permanent ban on industrial resource extraction in this sensitive ecosystem.

Proposed access road building and proposed barging of ore using hovercraft barges would both have biodiversity impacts. If barging is developed to access the mine, it would also make it easier to access two other proposed mineral mine sites nearby, Redfern Resources’ Big Bull mine and Canarc Resource Corp’s New Polaris gold mine.

The Tulsequah Chief mine has been approved by the BC provincial government environmental assessment process, but is still undergoing federal assessment. The Taku River Tlingit First Nation is presently undergoing negotiations over land use that includes the Taku watershed. Permanent protection of the wilderness, fish and wildlife values in the Taku from mining and resource extraction impacts is imperative.