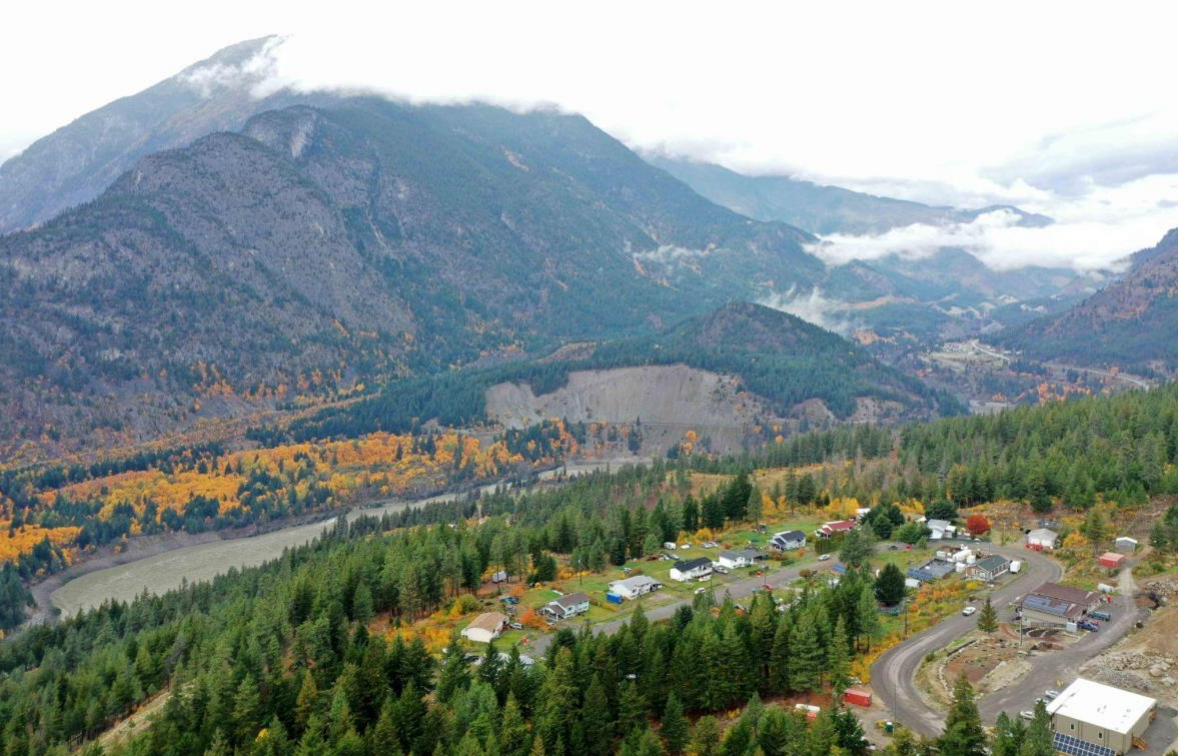 A proposed Indigenous Protected and Conserved Area (IPCA) in the Kanaka Bar Band’s Territory includes some of the rarest and most endangered old-growth forests in BC. The Kanaka Bar Band, a Nlaka’pamux First Nation in the Fraser Canyon 14km south of Lytton, about a 3-hour drive from Vancouver, today publicly announced the vision to establish the 350km² T'eqt'aqtn IPCA in their Traditional Territory. The proposed IPCA encompasses the Kwoiek and Four Barrel watersheds and adjacent parts of the Fraser Canyon, which will include roughly 125km² of old-growth forests. 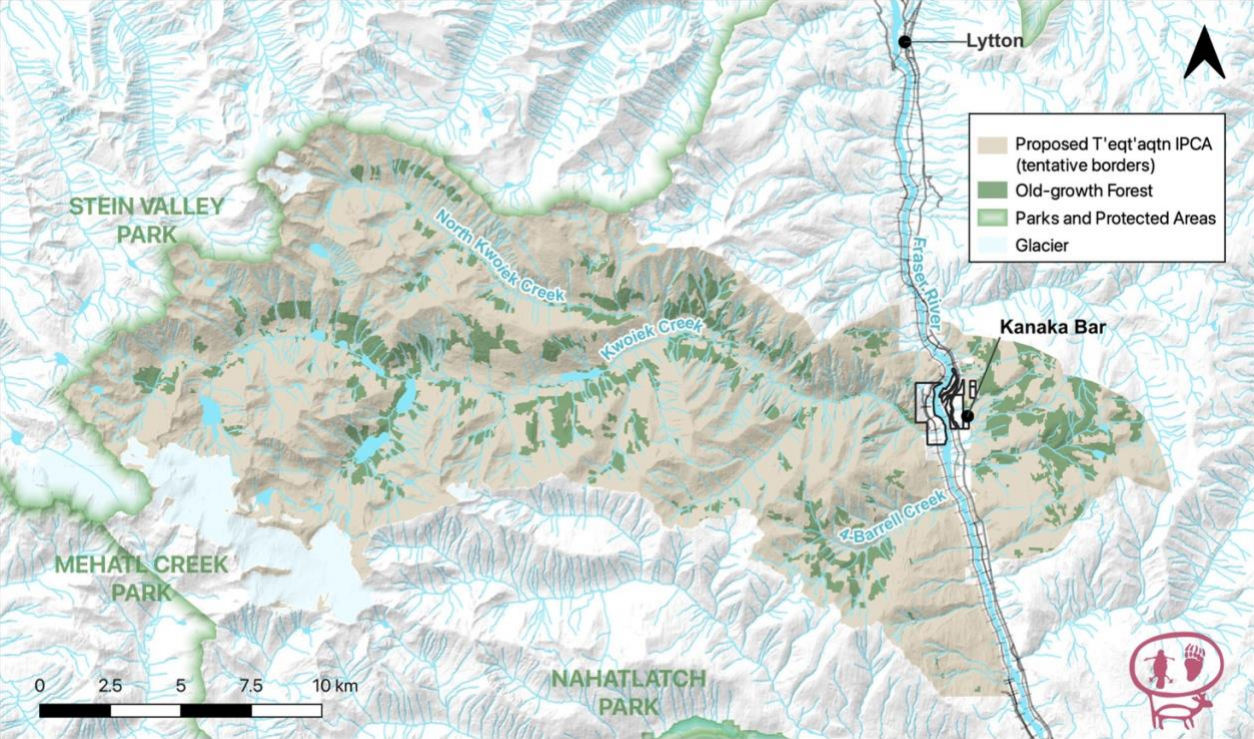 Kanaka Bar is endeavoring to establish this IPCA to safeguard the Territory’s unique ecosystems and cultural heritage from further harm, as well as to restore areas that have been damaged by industrial logging and mining over the past century. Although around 180km2 of intact forest remains, much of the Territory was clear cut by Teal Jones in the 1970s-90s, and significant restoration work is needed. To complete this work, as well as undertake activities to mitigate wildfires and other natural disasters, like landslides, the Band is developing a Land Guardian program in tandem with the IPCA initiative.

“Returning the Territory to Kanaka Bar will advance the entire Fraser Canyon’s climate resiliency,” said Sean O’Rourke, Lands Manager. “Functional, healthy ecosystems are our best defense against natural disasters. After more than a century of profit-driven management, it is time for a different set of values to guide land use. The wildfires and landslides of 2021 make this abundantly clear.”

Kanaka’s Territory is located just beyond the edge of the coastal ecosystems, a transitional area home to both rainforest species and those associated with BC’s dry Interior. Here, old-growth Western redcedar and Ponderosa pine can be seen growing side by side, and endangered Whitebark pine thrive in the subalpine. The area’s unusual climate creates distinct plant communities not seen elsewhere—like ćewéteʔ (barestem desert-parsley) and old-growth Ponderosa pine/Douglas-fir meadows—and allows many tree species to reach their full potential, like Canada’s largest Rocky Mountain juniper, as well as the largest Douglas-fir in BC’s Interior. It includes four biogeoclimatic zones: Engelmann spruceSubalpine fir, Interior Mountain-heather Alpine, Montane spruce, and Interior Douglas-fir, the latter of which is the least represented in protected areas of BC’s 16 major ecosystems.

Before colonization, T'eqt'aqtn, meaning ‘the crossing place’—in reference to two opposing whirlpools that enable the Fraser to be crossed here with just four paddle strokes—was stewarded by T'eqt'aqtn’mux (the people of Kanaka Bar) for over 8000 years. At this location, numerous village sites with dozens of house pits—some as big as bingo halls—dot the flats above the Fraser; and pictographs and petroglyphs, as well as culturally modified trees, mark important spots and travel corridors. In fact, one old-growth redcedar in Kanaka with 12 separate bark strippings and evidence of sustainable Indigenous logging holds the record for Canada’s ‘most culturally-modified tree.’

"What you do to the land (or allow others to do), you do to yourself,” states Chief Patrick Michell. “Kanaka Bar has been subjected to over a century and a half of colonization and greed, and we now face the global existential threat of climate change—but the damage can be reversed. Through this IPCA, we will rehabilitate Kanaka's Territory and heal not only our lands but our people."

Although tentative boundaries for the proposed IPCA have been established, much work remains before this vision becomes a reality. Kanaka is in the process of completing socio-cultural and biophysical conservation value assessments, and a socio-economic study, land use plan, and stakeholder engagements will also be done, but Provincial recognition and protected areas legislation, as well as Provincial and Federal funding for IPCAs, are the most vital pieces necessary to see this through.

The T'eqt'aqtn IPCA will not preclude all land uses and developments. Nlaka’pamux will be able to hunt, fish, and gather in these lands like they always have, and visitors who respect community values are welcome. Kanaka Bar will work with proponents whose projects are sustainable and in accordance with the community’s priorities, and the Band continues to develop food self-sufficiency initiatives and an ecotourism economy. Kanaka envisions a future in which generations of T'eqt'aqtn’mux to come will be able to sustainably live off and care for their lands, just as their ancestors did for millennia.

“We are excited to advance our plans for an IPCA at T'eqt'aqtn. Not only will it enhance the Indigenous governance over the land and protect old-growth forests, diverse ecosystems, and the cultural foundations of Kanaka Bar, but it will help build a conservation-based Indigenous-led economy in tourism, stewardship, and restoration that will bring greater prosperity to both Kanaka Bar membership and the whole Fraser Canyon’s economy,” said Greg Grayson, CEO of the Kanaka Bar Band.