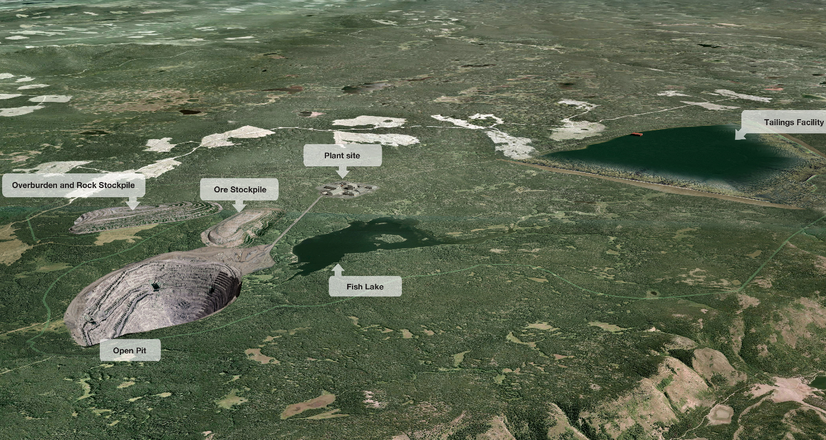 Two rejections by the federal government have not deterred a Vancouver mining company from again heading to court in an effort to quash Ottawa’s decision to turn down a proposal for an open-pit copper and gold mine in an area where the Tsilhqot’in Nation has established aboriginal rights.
Taseko Mines Ltd. is appearing in Federal Court in Vancouver this week to launch a constitutional challenge to the Canadian Environmental Assessment Act and ask for a judicial review of the federal government’s decision to reject the proposed $1.5-billion New Prosperity Mine, 125 kilometres southwest of Williams Lake.
Despite the project gaining provincial approval in 2010, the federal government turned down the proposal in 2010 and 2014, saying there would be severe environmental damage and immitigable adverse effects on Tsilhqot’in culture, heritage and aboriginal rights.
The panel found that Fish Lake, known as Teztan Biny by members of the Tsilhqot’in Nation, had unique cultural importance and would be harmed by the mine. In the first application the company planned to turn the lake into a toxic tailings dump and, although the second application spared the lake, the panel concluded the mine would still have severe impacts.
However, Tweet: Tsilhqot’in says @TasekoMines argues the EA Act goes too far in protecting interests of Aboriginal people http://bit.ly/2kdfXma #bcpoliTaseko is arguing that the Environmental Assessment Act, amended in 2012, goes too far in protecting the interests of Aboriginal people according to a Tsilhqot’in news release.
“In essence, the company is attempting to further reduce the protection of our already-gutted federal environmental laws, particularly as they apply to aboriginal people,” it says.
The company, in its application, says the review panel erred in the evidence it considered and that the company was not given an opportunity to challenge that evidence.
It is frustrating that the nation has to continue spending time and money fighting Taseko, said a Tsilhqot’in spokesman.
“After two federal rejections, this company still tries to bulldoze ahead and cause destruction in our territory,” Chief Roger William, vice-chair of the Tsilhqot’in National Government, said in a news release.
“For the past decade we have opposed Taseko Mines in the strongest terms and it is time they finally understood our position — simply stated, we do not consent,” he said.
The Union of B.C. Indian Chiefs is supporting the Tsilqhot’in people in their battle, said Grand Chief Stewart Phillip, UBCIC president.
“This is an arrogant and unrepentant company that has not learned its lesson, despite not one, but two scathing federal rejections by the Harper government, the most pro-industry and anti-First Nations government in memory,” Phillip said.
“We will continue to completely support the Tsilhaqot’in as they do what it takes to lay this wretched, destructive and highly offensive mine proposal to rest for once and for all,” he said.
The area gained additional significance in 2014 when the Supreme Court of Canada, for the first time in Canadian history, recognized aboriginal title on about 1,750 square kilometers of Tsilhqot’in Nation land — a decision that reframed the way resource companies and governments dealt with First Nations.
The mine is outside the title territory, but in an area of proven aboriginal rights, according to the Tsilhqot’in. It is part of the Dasiqox Tribal Park, created in 2014.
In an additional wrinkle, which will again draw the provincial government into the fray, despite a 2016 agreement to work on reconciliation, Taseko has applied to the province for a permit to start exploratory drilling.
The exploration would be extensive with road building, drilling, seismic line testing  and construction of a 50-man camp. The company has said it wants to be ready to start construction of the mine before the amended B.C. permit expires in 2020, but the exploration is strongly opposed by the Tsilhqot’in.
“[Taseko’s] permit application ignores all findings against the proposed mine. It is an insult to Tsilhqot’in and the rule of law,” William said.
Spokesmen for the Ministry of Energy and Mines did not reply to questions about the permit by deadline.
Taseko documents show the company has spent more than $130-million trying to develop the mine. The area is believed to be the largest undeveloped gold/copper deposit in North America and the company claims that, once in production, it would produce 250,000 ounces of gold and 110-million pounds of copper annually for 20 years.
More from this campaign