VICTORIA – The Wilderness Committee has launched a new interactive mapping tool providing a clear look at the destruction of rare and endangered forests facilitated by the B.C. government’s logging operation, BC Timber Sales (BCTS).

The ArcGIS StoryMap, BCTS: A government agency out of control, combines geographic information system (GIS) mapping technology with images, research and on the ground documentation.

“While we’ve worked to highlight the government-funded destruction of non-renewable old-growth forests in individual valleys, there wasn’t a one-stop-shop to learn about the extent of BCTS’ operations, so we built one,” said National Campaign Director Torrance Coste. “Many people in B.C. still aren’t aware our government doesn’t just allow clearcut logging in old-growth forests, it actively participates in it.”

BCTS is within the Ministry of Forests, Lands, Natural Resource Operations and Rural Development. The agency plans logging within the areas it manages, lays out cutblocks and builds roads and then auctions the cutblocks off to the highest bidder. In total, this accounts for around one-fifth of all logging in B.C.

Despite claiming to manage forests in the public interest and operating to high environmental standards, BCTS logging is at the centre of the conflict around record-sized trees, impacts on critical species habitat, impacts on parks and infringements of Indigenous rights in places like the Nahmint Valley, the Skagit Headwaters and Schmidt Creek.

“Our process is simple: we research where BCTS is currently logging and where they plan to log and then we download the maps and load up our gear and head out there,” Coste said. “What we find is some of the worst logging in some of the most important ecosystems in B.C. and the fact that our own government is behind this is outrageous.”

The new StoryMap tool will continue to grow as more information about BCTS operations is obtained. The Wilderness Committee is calling on people across the province to submit photos and tips about BCTS logging in their area, so the StoryMap can be expanded to provide a broader picture of what this government agency is doing.

“The BCTS areas we’ve documented on the ground should make everyone who lives here ashamed of our government, and we’re sure its logging isn’t any better across the province,” said Coste. “Working with the public, we hope to expose BCTS and build pressure to reign in this out-of-control agency and protect remaining non-renewable old-growth forests in B.C.” 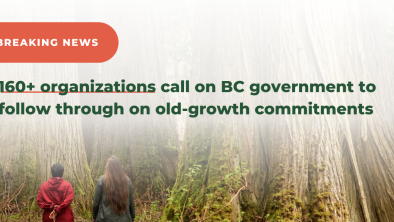