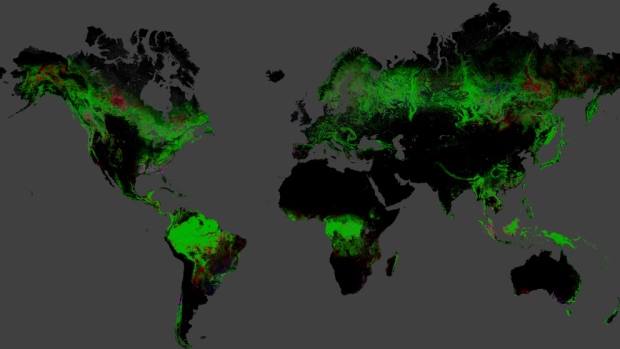 The world's virgin forests are being lost at an increasing rate and the largest portion of the degradation is in Canada, says a new report. No longer is Brazil the main villain in the struggle to stop forest destruction.
"Canada is the number 1 in the world for the total area of the loss of intact forest landscapes since 2000," Peter Lee of Forest Watch Canada said in an interview.
He said the main drivers are fires, logging and energy and industrial development.
"There is no political will at federal or provincial levels for conserving primary forests," Lee said.
"Most logging done in Canada is still to this day done in virgin forests."
Using satellite technology, scientists from the University of Maryland, Greenpeace, Global Forest Watch and the World Resources Institute have tracked changes in the Earth's forest coverage. The scientists discovered that the pace of decline is accelerating with more than 104 million hectares - about 8.1 per cent of global undisturbed forests - lost from 2000 to 2013.
If this rate of degradation continues, "business as usual will lead to destruction of most remaining intact forests this century," Dr. Nigel Sizer, director of the forest program at the World Resources Institute, said.
Computer graphics (www.globalforestwatch.org) based on satellite imagery show huge degradation of Canada's boreal forest from the Maritimes to Alberta with little compensatory gain. The boreal forests of Quebec, Ontario, Saskatchewan and Alberta appear to have been hit particularly hard by wild fires and resource exploitation.
The imagery shows the boreal forest in the area of the oilsands between Fort McMurray and Lake Athabasca has been almost totally devastated. Parks such as Alberta's Wood Buffalo, Ontario's Algonquin Park and the Assinica nature reserve in Quebec have not been spared.
The northern boreal forest belt that runs primarily through Canada and Russia, plus Brazil's Amazon represent 65 per cent of the world's remaining virgin forest. About 47 per cent of the global degradation has occurred in the boreal forest and 25 per cent in the Amazon, the report said.
"These last forest frontiers play a critical role in sustaining rich biodiversity, maintaining climate and weather stability as well as air and water quality, and supporting the livelihoods of forest-dependent communities," the report said.
Fires historically have been a natural source of regeneration in the boreal forest. But Lee blames climate change for the recent increase, pace and intensity of forest fires in Canada.
"Independent data verifies this massive increase in forest fires," he said.
The increase in temperatures in the north is much higher than the global average, he said.
"You are getting these huge fires which are truly degrading and no longer a part, in many cases, of the natural historic functioning of fires in boreal forests.
"They are now transforming many of these northern boreal forests into shrub lands."
More from this campaign