The Results Are In: Wild Salmon Need Action Now 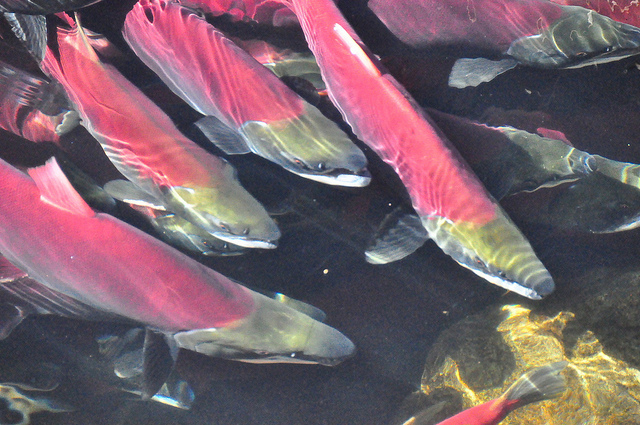 Yesterday was a good day for wild salmon in British Columbia. After many months of delay Justice Bruce Cohen released his long-awaited report on the decline of the once mighty Fraser River sockeye.

Justice Cohen's report was triggered by the 20-year decline of the Fraser River sockeye run culminating in the 2009 collapse. Ten million sockeye salmon were forecast to come back that year, but just 1.3 million returned. The public was stunned; and the resulting outcry led the federal government to create a commission of inquiry that fall to investigate the collapse.

On Wednesday afternoon, Cohen released his final report to the public. After 160 witnesses, 14,000 pages of transcripts, 2,100 exhibits and numerous delays, D-day was finally here.

I attended the press conference. Sitting cheek to jowl in a cramped conference room in downtown Vancouver with scores of journalists, environmentalists, First Nations, fishers and former DFO officers, people swapped notes and traded best guesses before Cohen came to the podium. Would his report be meaningful? Would Cohen make tough recommendations to protect wild salmon?

Essentially, his report told the Department of Fisheries and Oceans (DFO) to get back in the business of protecting wild salmon. Cohen called for better science, for real enforcement of existing laws and policies, such as DFO's Wild Salmon Policy, and improved habitat protection. He instructed DFO to rid itself of its conflicting mandate to protect wild salmon while at the same time promoting the aquaculture industry.

At the press conference he repeatedly stated that, "DFO's first priority must be the health of wild stocks." He flagged problems with Bill C-38, the federal government's budget bill, which was actually dedicated to rolling back environmental laws -- including gutting the Fisheries Act. He also cautioned and expressed concern that recently, one third of DFO's habitat protection staff in B.C. had been laid off.

The report was notable for finding no "smoking gun," no single cause for the dramatic decline in the 2009 Fraser River sockeye runs. Climate change and warming waters were a major concern to the health of wild salmon, as was the issue of open-net cage fish farms.

Cohen proceeded to recommend a freeze on open-net cage fish farms around the Discovery Islands, where Fraser River sockeye migrate past a gauntlet of these industrial feed lots. He also found that salmon farms have the potential to "introduce exotic diseases and to exacerbate endemic diseases," and recommended that DFO revisit, revise and improve fish farm siting criteria.

Significantly, Cohen recommended that if the impacts from fish farms in the Discovery Islands are found to be of more than "minimal risk of serious harm" to migrating sockeye salmon that the farms should be promptly shut down.

In total the Cohen report made 75 substantial recommendations to improve the sustainability of the Fraser River sockeye. The recommendations are meaningful and based on expert advice, on the public interest and the viability of B.C.'s coastal ecosystem.

While I wish Cohen had gone further and recommended the complete closure of all open-net cage fish farms on BC's coast -- due to the mounting scientific evidence showing that fish farms can be incubators for sea lice and disease outbreaks, which negatively impact wild salmon stocks -- I understand that this bold action was beyond his mandate.

The Cohen report is a gift; a well-researched and valuable tool by which to recover wild salmon, not only the Fraser River sockeye runs, but salmon populations across B.C. But its recommendations must be implemented, funded and enforced.

The ball is now in the court of the federal government. If Ottawa truly values wild salmon, they will shut down all open-net cage fish farms in B.C. and move with determination to fully implement all of the recommendations of the Cohen report. British Columbians need to let federal decision-makers know that anything less will not be tolerated. Justice Cohen has done his job -- now we need to do ours.