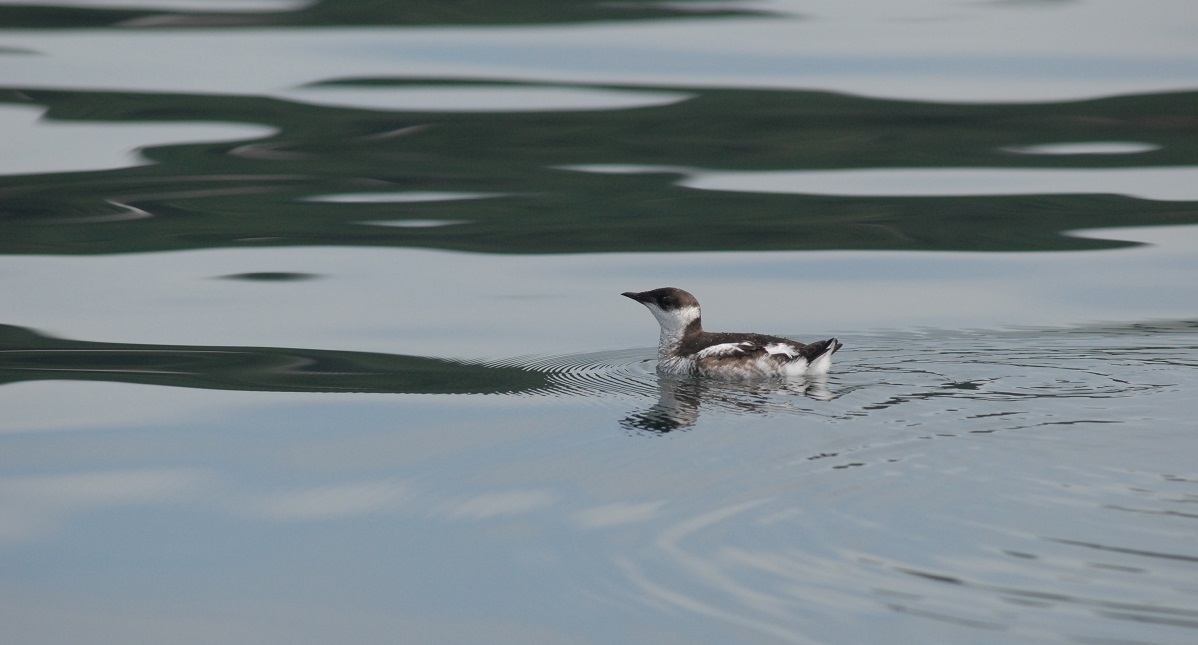 This summer alone, there have been over 300 marbled murrelet sightings in the area that Teal-Jones is now logging

VANCOUVER / SOOKE xʷməθkʷəy̓əm, Sḵwx̱wú7mesh, səlilwətaɬ AND t’Suk TERRITORIES —  Sierra Club BC and Wilderness Committee have received reports on the ground that Teal-Jones is now logging near Ada’itsx (Fairy Creek) in confirmed valuable habitat for marbled murrelet, a federally-listed endangered seabird.
This weekend, Teal-Jones contractors moved equipment into the adjacent watershed of Granite/Renfrew Creek to access BC Timber Sales (BCTS) approved old-growth cutblocks, even though aerial surveying produced by the B.C. government showed the area to be highly suitable potential nesting habitat for marbled murrelets. In early July, birders raised the alarm that marbled murrelets were nesting in the area. This summer alone, there have been over 300 marbled murrelet sightings in the area confirmed by marbled murrelet experts, including a recent survey.

Early Monday the RCMP escorted falling crews who began immediate active logging near ‘Heli-camp,’ a spur off the Granite Mainline forestry road, just outside the Fairy Creek Watershed Old-Growth Deferral Area. Marbled murrelets and their nests are ‘protected’ under the federal Migratory Birds Act and the provincial Wildlife Act, but protections are only triggered if a nest is found. Marbled murrelet nests are difficult to find because they’re located on top of moss covered branches of old growth trees, at least 40 feet above the ground.

“These laws were created without species ecology in mind, making them weak. Even when species are known to occupy an area during the breeding season, without a confirmed nest, there’s no habitat protection,” said Conservation and Policy Campaigner for the Wilderness Committee Charlotte Dawe. “Marbled murrelets build nests to be undetectable to predators like falcons, with eyesight eight times better than humans. It is ridiculous to think we’d be sufficient enough to locate every nest.”

On July 19, wildlife consultant Bernard Schroeder carried out a radar survey for marbled murrelets near this exact cutblock and observed a total of 97 murrelets within two kilometers of this location. The radar was able to detect murrelet activity at the top end of Granite Creek and into Fairy Creek watersheds, with at least 10 adults circling, which indicates proximity to a nesting location.

“The intact nature of the Fairy Creek watershed is unique in the southern Vancouver Island region and could provide significant refugia for nesting marbled murrelets in this area,” Schroeder outlined in his final report to Sierra Club BC and Wilderness Committee.

His report also highlighted the decline of marbled murrelet populations across all six conservation regions in B.C., with the most severe decline found in areas that have the most significant levels of old-growth forest removal.

“When old-growth forests are destroyed for short-term economic profits we lose critical biodiversity habitat forever. B.C. is Canada’s most biodiverse province; sadly it is also home to the most species at risk and is one of only three provinces that lacks an endangered species law,” said Britton Jacob-Schram, Sierra Club BC’s Grants and Partnerships Manager.

“The B.C. government committed to enacting species at risk legislation back in 2020. It’s beyond frustrating to know recovery for a unique, charismatic bird like the marbled murrelet will simply fall through the cracks of faulty election promises and government heel-dragging on protection for old-growth forests,” added Jacob-Schram.

A map showing the marbled murrelet habitat ranks, cutblocks, and radar station location for the July 19 ornithological survey can be found here: https://drive.google.com/file/d/14JujFhzt0ZU3sQ5ITf6wp-wFyD37yPlC/view?usp=sharing

Images of marbled murrelets can be found here: https://drive.google.com/drive/folders/1bpTGqvF_-TunhaKSij08UInE2JS397rJ?usp=sharing