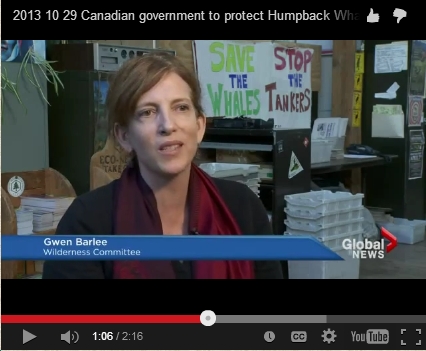 This is a TV news story that announces that after a five-year delay, the Government of Canada has just published a final recovery strategy for humpback whales off the West Coast that recognizes shipping traffic and toxic spills as threats to critical habitat. The threatened whales have been central to the debate over increased oil-tanker traffic along the British Columbia coast, and opponents of oil shipping hailed the strategy as a victory. The Wilderness Committee's Gwen Barlee and Ecojustice's Susan Pinkus are interviewed in this news report.