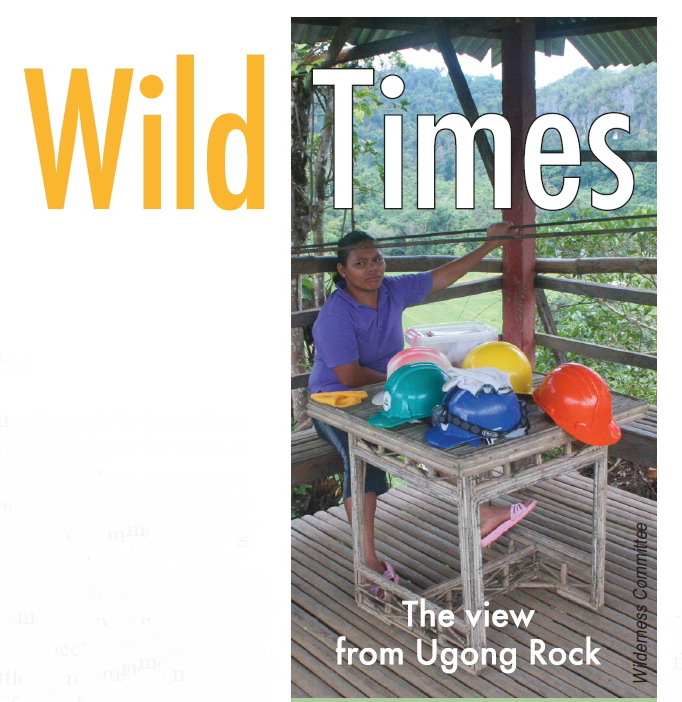 March 1st, 2011 - Read Joe Foy's Wild Times column in the Watershed Sentinel as he reminds us that people are taking a stand in defence of nature all over the planet.

Staring through the blur of tree trunks that lined the road as we bumped along in our van, I could see a massive seven-storey high chunk of limestone rising from a rice field.

I was on the island of Palawan in the Philippines, on a trip this past January to reconnect with family and to learn a little more about the nation where my wife was born.

Up ahead, we turned off the road onto a side track that a wooden sign identified as the way to Ugong Rock. The track soon dead-ended at a small gravel parking lot where a fellow in a hard hat informed us that for a small fee we could be led up to the top. This sounded pretty cool to me. But the coolest part was when the guide explained that the route went through natural cave passageways that corkscrew to the top. Wow. I was sold. I had to go.

On the way up, I learned some things from my guide. Ugong Rock is an ecotourism enterprise, its trail system and guides provided by the adjacent rural community of Tagabinet, as a way of generating a modest income for local people without destroying Palawan’s rainforest environment. A local man by the name of Dr. Gerry Ortega was one of the Ugong Rock project’s key organizers, and one of the most vocal supporters of a Palawan economy based on ecotourism, not logging and mining. He even had his own radio show, which he used to speak out for a sustainable Palawan.

The view from the top of Ugong Rock was breathtaking. And hopeful. I could see that a zip line had been strung from the peak all the way down to the rice field below. That will be quite a ride when it’s finished, I mused. It reminded me of the zip line eco-tour in the Kennedy River canyon in Clayoquot Sound, constructed last year in partnership with the Tla-o-qui-aht First Nation.

After hiking back down and saying thank you to my guide, I saw a little group of men, women, and kids unpacking some large cardboard boxes full of t-shirts. The shirts had the slogan “Never Mine Palawan” in big letters across their front. I listened as the people explained to me that there are several existing and proposed mining projects that threaten to rip the guts out of Palawan’s ecotourism future. In response, the people of Palawan have organized themselves and, thanks to leaders like Dr. Ortega, are demanding a total mining ban.

We bought some shirts and promised to do what we could do to help from Canada.

Two weeks later, while waiting for a ferry boat, I picked up a newspaper from Manila. There he was, on the front page: Dr. Gerry Ortega murdered, gunned down in cold blood by an assassin packing a 45-calibre pistol. Police were quoted saying they had the shooter in custody. The article said that the assassin had admitted to having been offered cash to murder Dr. Ortega.

I felt sick, and thought about Dr. Ortega’s poor family. What must they be going through? And what about his community? How does anyone speak out any more when for a few dollars someone could be sent to sneak up and shoot you?

But in the days that followed, people did step up and speak out. Fearless editorials appeared in newspapers across the Philippines, even though this country has one of the worst records for unsolved murders of journalists on earth.

Across the Philippines, people held rallies, made YouTube videos, and organized petitions demanding justice for Dr. Gerry Ortega and the fulfillment of his dream – Never Mine Palawan. Now they are looking for international support to preserve this beautiful island’s environment.

Go to http://www.no2mininginpalawan.com/ to read and sign the petition to protect Palawan from mining. It will be sent to the provincial government of Palawan and the national government of the Philippines. The people of Palawan are looking for 10 million signatures. It’s a big climb – one of which I think that Gerry Ortega would have been proud. They got my name on that petition. How about yours?

When I visited, the view from Ugong Rock was hopeful. It still is.