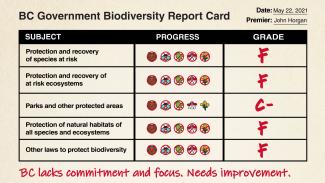 Last year marked the end of the “Aichi decade.” In 2010, the international community met in Aichi, Japan and set targets requiring all governments to make measurable progress in conserving the planet’s wildlife and natural systems (biodiversity) by the end of 2020. We are in the midst of a biodiversity crisis on par with the climate crisis, and all governments need to step up to meet this challenge. At the end of the Aichi decade, it’s time to evaluate how B.C. did.

B.C. is in many ways a “poster child” for the biodiversity crisis — it has the richest biodiversity in Canada, but also the highest number of species at risk. In general, we found the B.C. government has failed to meet international standards and other important legal commitments to protect and restore its biodiversity. But it’s not all bad. For example, B.C. has made a good start with its network of protected areas.

We are faced with the enormous but achievable task of saving the biodiversity we all rely on. It will take drastic change but we have no choice but to rise to the challenge. We need the B.C. government on board.