BC Gas: Boom or Bust? 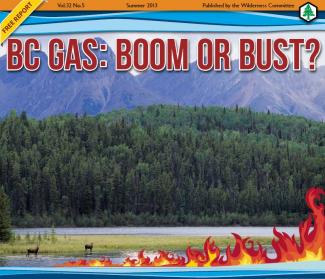 Gas industry puts our climate and water at risk

Recently there has been a lot of discussion around the potential for massive growth in the export of liquefied natural gas (LNG) from BC. British Columbians have been wooed with claims from the BC government and the gas industry about the promise of economic prosperity that would come from exporting these products. But what they aren’t telling us is that this resource comes with serious risks.

That’s because most of the gas that would feed the province’s monster new LNG industry would be obtained using the hazardous extraction method known as hydraulic fracturing (or “fracking”).

Most of the province’s conventional natural gas has already been extracted. The remaining gas is hard to get at since it’s trapped deep below the ground in shale bedrock, so it is primarily sourced through the practice of fracking – injecting chemical-laced water deep underground at high pressures. With fracking taking over the industry’s production, natural gas isn’t so natural anymore.

After the gas is fracked, LNG plants create a whole new threat. If all the proposed LNG plants on BC's coast are built, the level of greenhouse gas emissions that would be produced by these plants would destroy any hope we have of controlling our impact on the climate.

Fossil fuel pushers are asking us to bet our economic future – and our environment – on Liquefied Fracked Gas. We say the time has come to stand up and say NO! to fracking and LNG.