BC Rivers at Risk 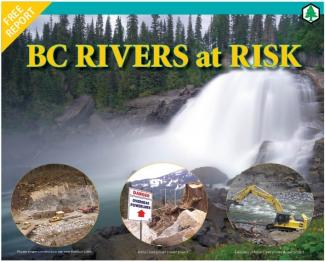 Wild places like Bute Inlet and Glacier/Howser Creeks are not only scenic areas, they are just a few of the hundreds of rivers and creeks that have become flash points over the last three years in the battle that is raging over private hydropower projects in BC. From the Kootenays to the Sunshine Coast, over 800 of British Columbia’s water bodies have been staked by corporations which now include large multinational players such as General Electric.

People may wonder how this gold rush for our public wealth began. The trigger was the 2002 BC Energy Plan, introduced shortly after the BC Liberals were elected, which forbade BC Hydro from competing with the private sector by barring it from producing new sources of electricity. At the same time it directed BC Hydro to meet future projected electricity needs by purchasing energy from private power developers. Since that time there has been a phenomenal 1,140 percent increase in these so-called “independent power project” applications throughout BC.
Read it here
BC Rivers at Risk.pdf