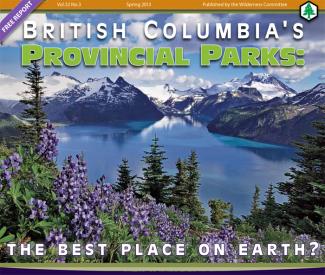 Whether it is hiking in the Walbran, cross-country skiing at Silver Star, swimming at Sun-Oka Beach, canoeing on Bowron Lake or having a picnic at Golden Ears, BC’s provincial parks have something for everyone. Alpine meadows, grizzly bear sanctuaries, old-growth temperate rainforests, sweeping grasslands and majestic mountain peaks are just some of the special wild places that have been protected by generations of British Columbians for the benefit of our children and grandchildren.

Together, we have created a park system that is second to none. From our first provincial park, stately Strathcona Park on Vancouver Island which was established in 1911, our parks and protected area system has grown to 13.5 million hectares – providing vital refuge for wildlife, protection against climate change and an opportunity for people to reconnect with nature.

Parks belong to us. We entrust this public legacy to governments, to manage on our behalf. But today, this legacy is in trouble.

Over the past decade, BC parks have struggled under a litany of funding cuts and regressive policies implemented by a provincial government that doesn't respect the ecological value of our protected area system, and doesn't understand the importance of that system to the public.

But all is not lost. With vision, planning, commitment and proper funding we can ensure that our provincial park system regains its leadership role in North America. Read this paper to find out the first steps that need to be taken.