Canada's Tar Sands: What the government doesn't want you to know 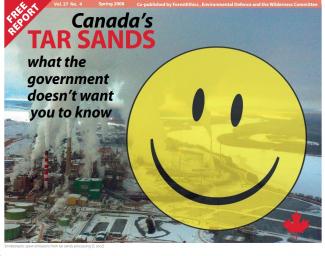 Few Canadians know that Canada is home to one of the world’s largest dams and it is built to hold toxic waste from just one tar sands operation in northern Alberta. Everything about the tar sands happens on a massive scale. The enormous toxics problems go hand-in-hand with massive global warming pollution and the impending destruction of a boreal forest the size of Florida.

No matter where you live in Canada, your desire to tackle global warming is being held hostage to the tar sands. Instead of reducing greenhouse gas emissions, Canada is quickly increasing them, and fully half of that emissions growth is projected to come from the tar sands.

This is Canada’s problem. It’s time to clean it up or shut it down.