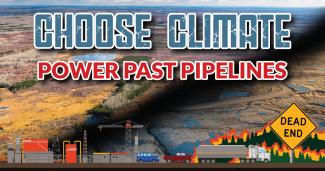 Read the full report by clicking here. Look below for the first article.

Not one more taxpayer dollar for tar sands expansion

As Canada heads into the 2020s, it’s hard not to feel a sense of calamity in the headlines. It seems the winter blasts as Arctic air spills southwards fold right into severe flooding in the spring and onto catastrophic wildfires and deadly summer heatwaves.

People are rising up. An army of protesters and students are regularly walking out from classes and workplaces across the country.

What’s our federal government doing in these dire times? It’s building the brand new Trans Mountain pipeline expansion to allow tar sands companies to produce even more of the dirty oil fuelling these disasters. And they’re doing it with your hard-earned money.

Canada’s the fourth largest oil producer in the world. Oil and gas is the country’s single most polluting sector, worse even than transportation and responsible for more than a quarter of our carbon emissions.

In order to hold global warming to safe levels, the world’s best scientists tell us we need to reduce carbon pollution by 7.6 per cent every year for the next decade starting yesterday. That’s going to be extremely challenging even without tar sands expansion working against our efforts.

For the last decade, a broad Indigenous-led movement across North America has fought pipeline projects to protect local waters and stand in the way of the production of planet-warming fossil fuels. In Canada, that means stopping the expansion of the Alberta tar sands.

Many of us are trying to reduce emissions — taking transit in urban centres, using cleaner power, insulating buildings more efficiently and living in denser communities. Meanwhile, the nation’s most polluting companies are refusing to do their share and instead want to double production of fossil fuels, starting with the Trans Mountain pipeline.

That’s why the project has become what should be a “last showdown” in Canada’s fight for a safe climate and against fossil fuel power. Like the French emperor Napoleon Bonaparte’s final defeat — it’s time for Big Oil to meet its Waterloo.

That doesn’t mean workers have to suffer. Quite the opposite and despite what Alberta’s corrupt establishment believes, many residents are ready to get off the boom-and-bust rollercoaster of fossil fuels. Instead, provincial and federal governments are using tens of billions of public dollars in a desperate attempt to prop up the failing industry.

Polls show 74 per cent of Canadians — including half of Albertans — support or can accept a phase-out of the extraction and export of fossil fuels over the next 20 to 30 years. Research found people are even more supportive of that transition if it comes with a “good jobs guarantee” for anyone currently employed in fossil fuels.

Canada is full of talented, driven people who just need to know they have a place in the post-carbon economy. Rather than cut a blank cheque for the Trans Mountain pipeline and prop up the nation’s most polluting sector for a few more years, let’s invest the money in a future that will actually last.

Like the first article? Click here to read the full report! Action you can take is found on the back page of the report.