Report Brief: Species at Risk Recovery in BC 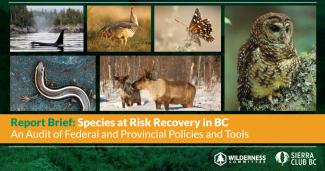 AN AUDIT OF FEDERAL AND PROVINCIAL POLICIES AND TOOLS

We are in the midst of the sixth mass extinction event on Earth, and the first that is due to human activities including habitat destruction and a changing climate (Ceballos et al., 2015). B.C. is home to the highest amount of biodiversity in Canada, but also home to the greatest number of species at risk (Westwood et al., 2019). Over 1900 species, subspecies and ecosystems are listed as at-risk in B.C. (“BC Species and Ecosystem Explorer,” 2020).

Research shows that Indigenous managed or protected lands harbor the greatest amount of biodiversity. The International Institute for Sustainable Development states: “Indigenous lands make up around 20% of the Earth’s territory, containing 80% of the world’s remaining biodiversity — a sign Indigenous Peoples are the most effective stewards of the environment” (Recio & Hestad, 2022). Indigenous worldviews and governance systems show us that human presence on the landscape is not inherently harmful. The biodiversity crisis is not a problem intrinsic to human nature. It’s a problem rooted in the systems of colonialism and the extractive industrial resource economy.

While Indigenous laws that help maintain rich biodiversity have never ceased to be practiced, they are continually undermined by B.C. government laws. Recognizing that the vast majority of land and water in B.C. are subject to federal and provincial government laws around species protection, Wilderness Committee and Sierra Club BC commissioned biologist Jared Hobbs to complete an audit of existing biodiversity policies in Canada and British Columbia and their effectiveness in protecting species faced with extinction. This report brief summarizes the research, and the findings clearly demonstrate that current federal and provincial legislation are not safeguarding biodiversity and species at risk.

It’s clear we need a better path forward. Wilderness Committee and Sierra Club BC propose an overarching provincial law in B.C., to be co-developed with Indigenous Nations which prioritizes biodiversity and ecosystem health. The fostering of biodiversity on Indigenous lands is often related to a worldview in which resource management decisions align with the responsibility to maintain healthy ecosystems. A new law that provides a framework for protection of ecosystems, habitats and species at risk in all resource management decisions will move B.C. toward better relationships between people and the living environment on which we all depend.

The core findings of this report are (1) the federal government is failing species at risk by delaying information gathering and critical habitat mapping, (2) during the critical habitat mapping process governments rely on underlying assumptions and incomplete consideration of available data that reduce accuracy of the maps, (3) the B.C. government lacks the legislative framework to address all threats facing species at risk on provincial land, therefore species at risk are not being effectively protected as required by the federal Species at Risk Act (SARA) and (4) the B.C. park system falls short of protecting biodiversity because the highest biodiversity zones are proportionally under-represented in the park system.

Some details about these highlights:

Read the full PDF version of the report brief

1. Delays in identification of critical habitat in BC 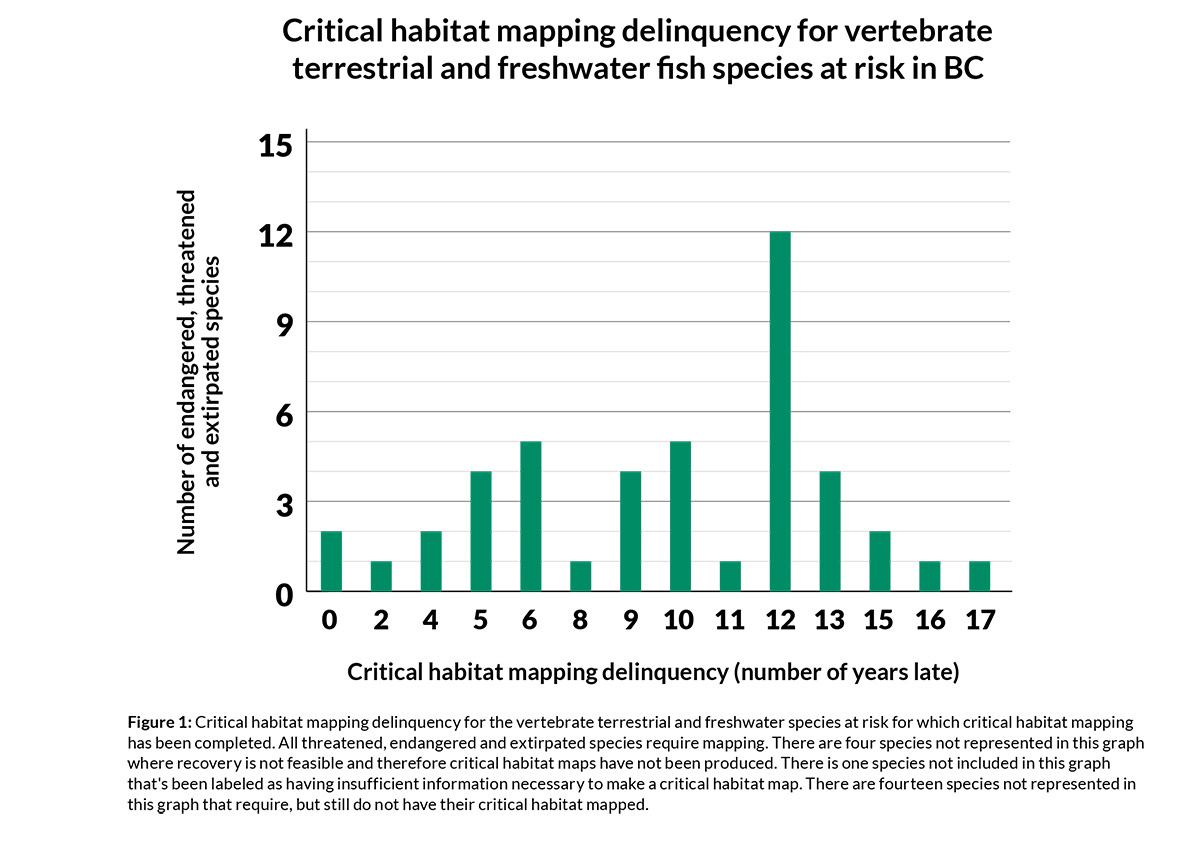 Identification and protection of critical habitat is one of the most contentious and drawn out decisions faced by government agencies.

Typically, critical habitats of listed species are areas that are also valued for resource extraction, development, and recreational activities. This results in delayed recovery processes.

The consideration of socio-economic impacts, often to extractive resource industries, when identifying critical habitat are typically muddled by competing government objectives, such as permitting resource extraction. Interest groups who benefit from delay in taking action lobby strategically for the need of “more information,” not because they are concerned about the efficacy of protection actions, but because their interests are best served by delaying action as much as possible (Martin et al., 2016).

Underlying assumptions and incomplete consideration of available data reduce accuracy with both approaches. Even when critical habitat is mapped there can be large errors of inclusion and exclusion that dilute the effectiveness of habitat protection. This leads to critical habitat maps that do not properly cover or shield species at risk core habitats. For example, the western rattlesnake has 67 known den sites that were excluded from the mapped critical habitat boundaries resulting in critical habitat destruction near den sites. Federal and provincial governments must improve accuracy of critical habitat mapping and avoid illegitimate delays by engaging external scientists to address information gaps early in the process.

3. Lack of threat mitigation for species recovery in law

For species at risk to recover, the threats that cause population decline must be addressed and mitigated. The SARA is applicable by law to all lands under federal jurisdiction (federal parks, federally designated Wildlife Management Areas, and designated First Nation Reserves and military reserves). However, under SARA, it is the responsibility of each province and territory to develop and implement equivalent effective legal protection on provincial lands as those afforded by SARA on federal lands.

The designation of this responsibility has arguably been the single biggest failing of SARA because it hands over the duty to effectively protect species on non-federal land. It does so regardless of whether or not the province or territory has legislation to achieve this. In B.C. the vast majority of species at risk critical habitat is on non-federal land as it makes up 94% of the landbase. The province is not ready for the task of
mitigating threats to species at risk because it still lacks stand-alone legislation that protects critical habitat for species listed under SARA.

Emergency measures, such as section 80, exist under SARA and allow the federal government to take over critical habitat management on non-federal land when the province fails to do so. However, these emergency measures are rarely implemented anywhere in Canada. There is broad discretion afforded to the federal cabinet allowing it to decline recommended emergency orders that would provide important critical habitat preservation to a species facing imminent threats to their survival and recovery. In B.C.,
Section 80 has never been put into effect for species on non-federal land despite legal petitions to do so for the spotted owl and southern mountain caribou.

Threats to species at risk are not addressed by B.C. laws and regulations

For provincial lands, the B.C. government relies on piecemeal legislation, best management practices (non- legal recommendations and guidance) and policies. The patchwork of laws B.C. is currently using do not address or effectively protect species from all IUCN threats, as required by SARA.

Two examples of IUCN threats not addressed within the legislative framework in B.C. include:

IUCN threat 5: Biological resource use and harm — Effective legal preservation of critical habitat is not required under the Forest and Range Practices Act. When logging corporations are planning cutblocks there is no requirement to survey for evidence of species at risk. If the corporation voluntarily does do this, they have no requirement to report their findings to the province. The result is habitat where species at risk are residing is often cut down. 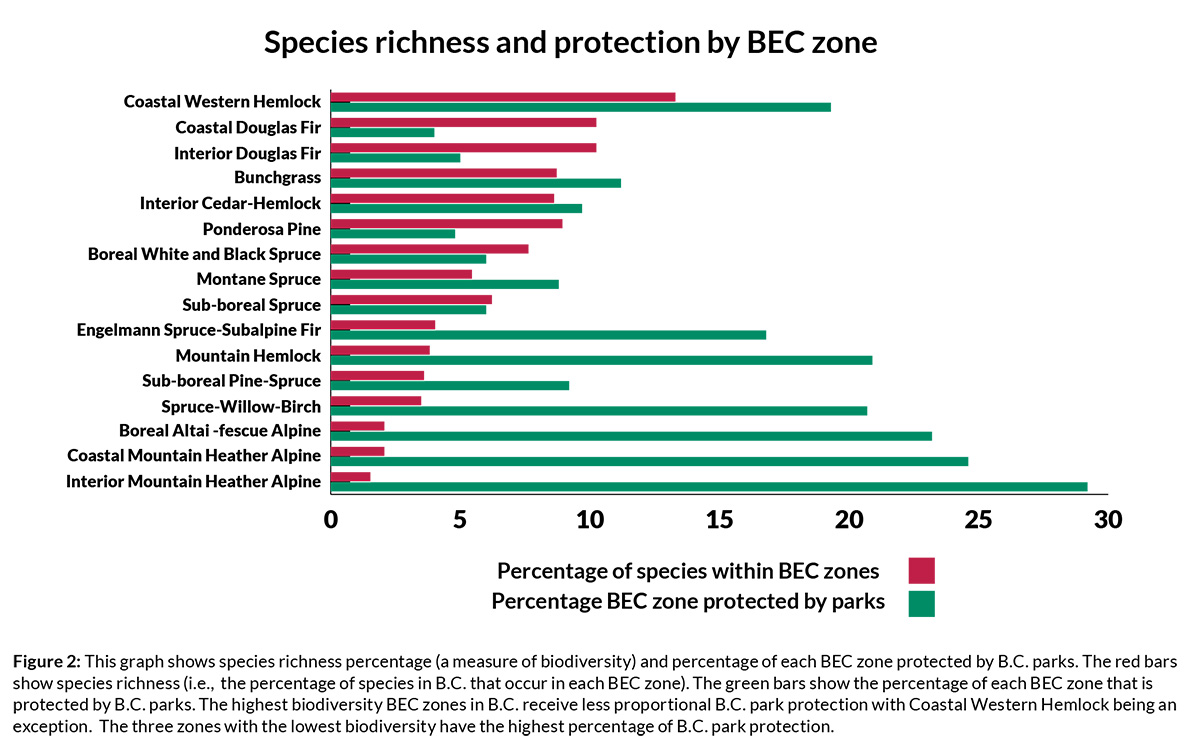 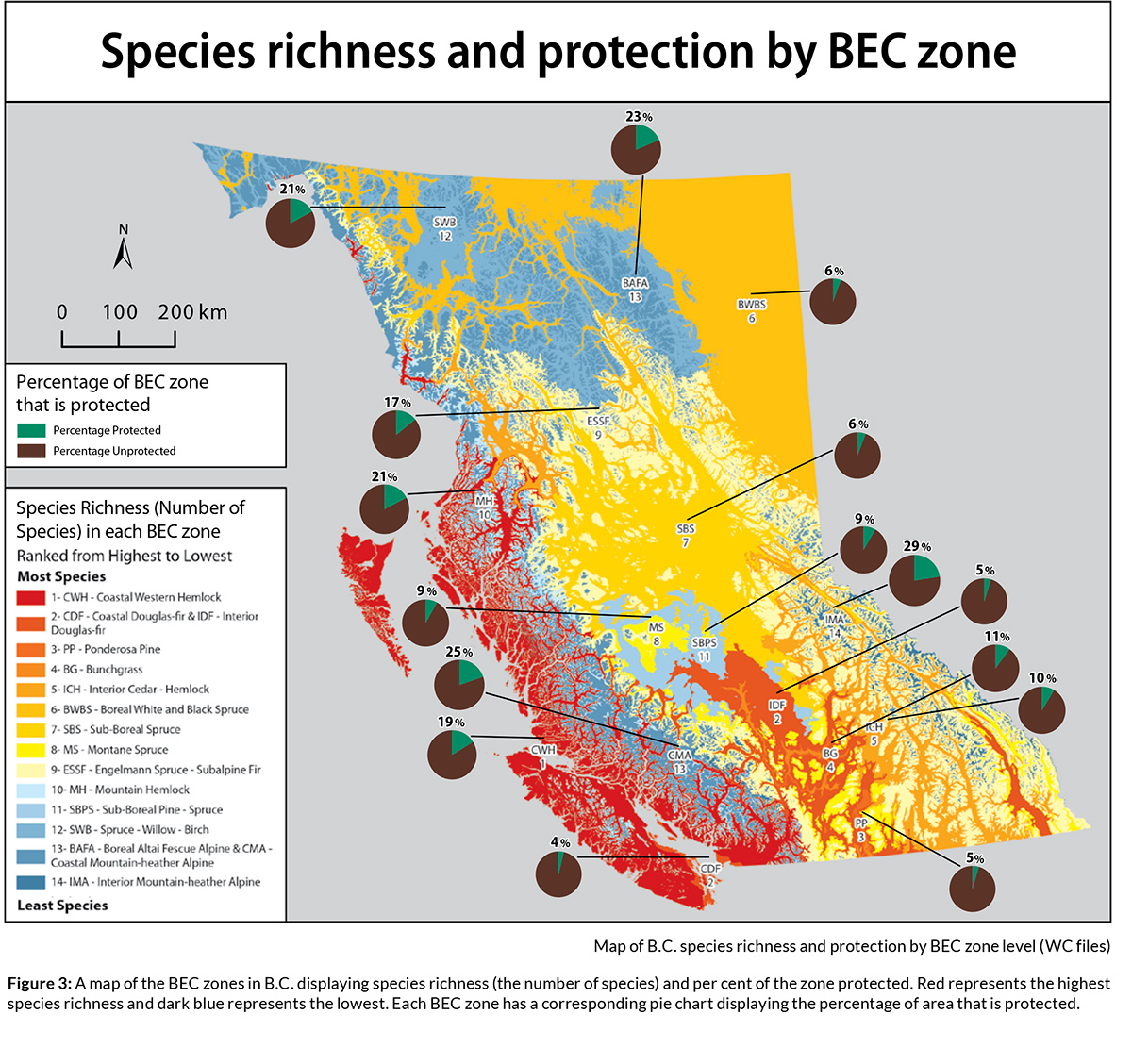 Law reform is needed to achieve effective protection for species at risk and biodiversity across B.C. Specifically, B.C. must implement legislation — co-developed with Indigenous communities — that will safeguard at-risk species and ecosystems. That means protecting and restoring habitat and the ecological processes upon which species rely. A provincial biodiversity law would be applied across all resource sectors, and require the government to develop and implement plans. The law must be aligned with the United Nation Declaration on the Rights of Indigenous Peoples as confirmed by the Declaration on the Rights of Indigenous Peoples Act.

Following through and making biodiversity legislation a reality would allow the B.C. government to deliver on several past and current provincial government goals and priorities:

Because of these legislative failures, species at risk continue to be sacrificed in the name of industrial extraction and many wildlife populations are nearing their tipping point, a trend exacerbated by the climate crisis. For too long harmful activities have gone unchecked in species at risk habitat. Business as usual on the landscape is no longer an option if we are to combat the biodiversity crisis.

Indigenous Peoples are the best stewards of the land and biodiversity. The Union of BC Indian Chiefs have called on B.C. to explicitly commit to the enactment of a new, overarching law for the protection of biodiversity, developed in cooperation with Indigenous Peoples and in full alignment with the UN Declaration on the Rights of Indigenous Peoples. This will advance the actions that are critical for ensuring Indigenous Title and Rights are upheld and used to strengthen biodiversity conservation and management.

Wilderness Committee and Sierra Club BC are calling on the B.C. government to follow through on its promise to enact biodiversity legislation and do this consistently with the UBCIC’s resolution for this legislation.

To ensure species recovery and follow through on provincial and federal commitments, B.C. needs overarching legislation to safeguard biodiversity and protect all species at risk, their habitat and ecosystems. A provincial biodiversity law that is co-developed with Indigenous Nations is necessary to chart a better path forward.

First, the Wilderness Committee and Sierra Club BC would like to acknowledge the species, for telling their story through their own declines as they struggle with the changes we have wreaked upon their habitats in B.C. We hope their message is heard.

We would also like to acknowledge Jared Hobbs (Director: J Hobbs Ecological Consulting Ltd.) for reviewing federal and provincial recovery policies and for analyzing and summarizing their actions taken in the interest of species recovery in B.C. This report was commissioned, by Sierra Club BC and Wilderness Committee, for the purpose of improving understanding and awareness of the governments' commitments to species at risk recovery in B.C. This audit is supported by a detailed analysis of implementation, in the spirit of improving conservation effectiveness in B.C., and is intended to provide constructive insight to inform future recovery objectives and actions.

Of equal importance, Wilderness Committee and Sierra Club BC would like to acknowledge the contribution and insights provided by Indigenous Peoples for sharing their perspectives, their knowledge, and their understanding of the many changes brought about to both species and the ecosystems these species depend upon. The anticipated current and ongoing contribution of Indigenous knowledge holders towards species at risk management will afford perspective, and hopefully inform a more holistic understanding of a pre-colonial context. This important perspective allows us to better understand our anthropogenic influence on biodiversity in British Columbia and to envision a more inclusive and forward- thinking approach. This will inform us, as we move forward, to ensure the message imparted by the declines evident for so many species at risk are not lost in our understanding of what we need to do.