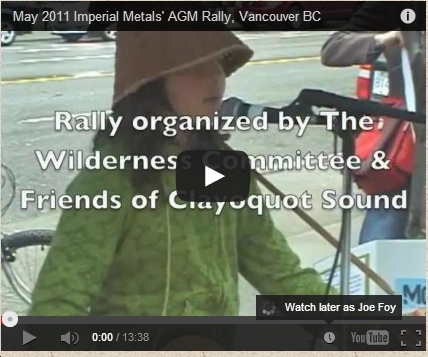 Clayoquot Sound First Nations speak out against 2 potential mines in their traditional territory (& UNESCO Bioshpere Reserve!) at a rally held outside Imperial Metals Corp.'s AGM in Vancouver on May 12, 2011 organized by The Wilderness Committee & Friends of Clayoquot Sound.
The proposed gold mine would be in the Tranquil Valley very near Meares Island. The proposed copper mine on Catface Mountain (Chitapii) would be a mountain top removal, open pit style mine!