‘Horror shows’ on B.C. rivers: Government given an ‘F’ for handling of run-of-river power projects 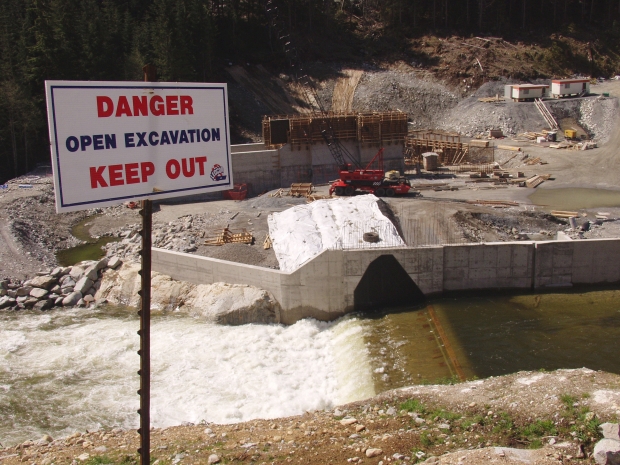 The majority of run-of-the-river power projects in B.C.’s South Coast region are not being operated in a satisfactory environmental manner, according to Freedom of Information documents provided to The Province.

“And the reality is that it’s a bit of a mess right now. Some of them are just absolutely horror shows.”

For years, environmentalists have been raising alarms about these hydroelectric power projects, which divert river water flows through turbines to generate power.

The main fear is the impact they have on fish, both upstream and downstream.

Details of the ongoing problems are highlighted by internal government documents recently obtained by the Wilderness Committee through a Freedom of Information request and reviewed by The Province.

The documents come from a July 2012 government workshop held at the Environmental Assessment Office in Victoria. The workshop was aimed at tidying up an industry that has had highly publicized issues with non-compliance.

According to the workshop documents, at that time only four of 22 run-of-river projects in the South Coast region had satisfactory operational parameters and procedures in place.

To get an updated picture, The Province asked the Ministry of Forests, Lands, and Natural Resource Operations how many projects currently have satisfactory ratings.

As of this month, there were two new projects in operation, but still a total of 18 of 24 with unsatisfactory operating procedures, according to an email to The Province from a ministry spokesman.

For Gwen Barlee, Wilderness Committee policy director and long-time critic of run-of-river projects, this progress in the year and a half since the workshop “just doesn’t cut it.”

“I’d give them a solid F,” said Barlee, who added she had to “fight and plead” to get the government documents through her FOI request.

“It says to me the government doesn’t have the capacity or doesn’t take this issue seriously.”

Barlee noted that when these water power projects have compliance problems and divert water improperly, it can endanger fish populations.

The 2012 workshop documents show that at least three of the projects have had “fish kills,” but adds the problem “may be happening on more projects, (though) there is a lack of data.”

Barlee said the lack of progress on compliance is especially frustrating after the provincial government had said repeatedly since the 2012 workshop that monitoring of water power projects would be a “priority” issue.

Ministry representatives said monitoring was “an identified priority of the province” in May 2013 after another FOI request from Barlee revealed that 90 per cent of projects as of September 2011 had incidents and didn’t comply with environmental requirements.

She said the new data shows that “this is an industry incapable of policing itself and we have government staff that are so thin on the ground that they can’t do their job.”

Representatives of the Independent Power Producers industry say the run-of-river projects are still relatively low impact compared with other resource industries in B.C.

“The industry is doing what it can,” said Paul Kariya, executive director of Clean Energy B.C., the industry trade association advocating for clean energy project developers, including run-of-river projects.

“I can’t speak for government, but on the industry’s side, we’re doing everything we can to make sure we’re being as light as possible on the landscape.”

To that end, Kariya pointed to an independent review of run-of-river projects, expected to be released within the next week.

The study, managed by the Pacific Salmon Foundation and funded in part by Clean Energy B.C., will examine impacts of run-of-river projects on fish populations.

The review was commissioned three months after the July 2012 compliance workshop that produced the documents in Barlee’s FOI request.

According to the Pacific Salmon Foundation, this will be the first study of its kind in B.C., and one of very few done anywhere in the world. The final report is to include a set of recommendations based on findings of the study.

“This study, it won’t answer everything, but it will deal with the central part of some of the questions,” Kariya said.

Photo: IPPs like this one on the Ashlu River divert water through turbines, causing concern over their impacts on fish and fish habitat. (Gwen Barlee)