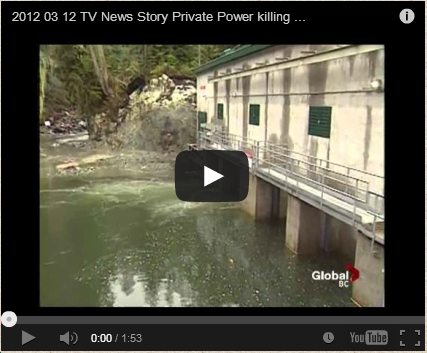 Three thousand pages of documents obtained by freedom of information request have revealed that run-of-river hydro projects are killing fish in this province.

The independent power industry bills itself as green, sustainable and environmentally responsible, but critics say that is not the case.
The Wilderness Committee says it now has proof from the government's own experts that run-of-river hydro projects on the Lower Mamquam and Ashlu Creek near Squamish are killing fish.

"With private power projects the flows can increase or decrease," says Gwen Barlee with Wilderness Committee. "What was happening on a repeated basis is fish including salmon, steelhead and trout, were getting stranded and were dying. And it was not one incident, or two or three; it was a score of incidents."

Run-of-river projects produce electricity by diverting river water through an underground pipe to a powerhouse. The water is then returned to river.

The power industry claims it's more environmentally friendly than hydro electrical dams, but according to the documents, department of fisheries experts say there's considerable non-compliance with managing flows for fish.

Two DFO experts expressed great concern over the death of salmon fry on the Lower Mamquam, in a letter to Capital Power Corp, now Atlantic Power, dated last year, they said "stranding and/or killing of fish is in contravention of the fisheries act."

The company refused to answer any questions, but emailed a statement saying it's operating in accordance with the permits and licenses granted by the provincial and federal governments.

The federal government didn't call us back, neither did Innergex, which runs the Ashlu project; B.C.'s ministry of environment says staff are addressing environmental concerns.

Barlee says the government needs to make sure that these companies operate within the law, and if they can't ensure that, then they need to be shut down."

There are about 50 private hydro projects in operation in B.C. right now and another 62 are in the planning or construction phase.

There are outstanding applications for another 635 projects, although they won't all be approved.