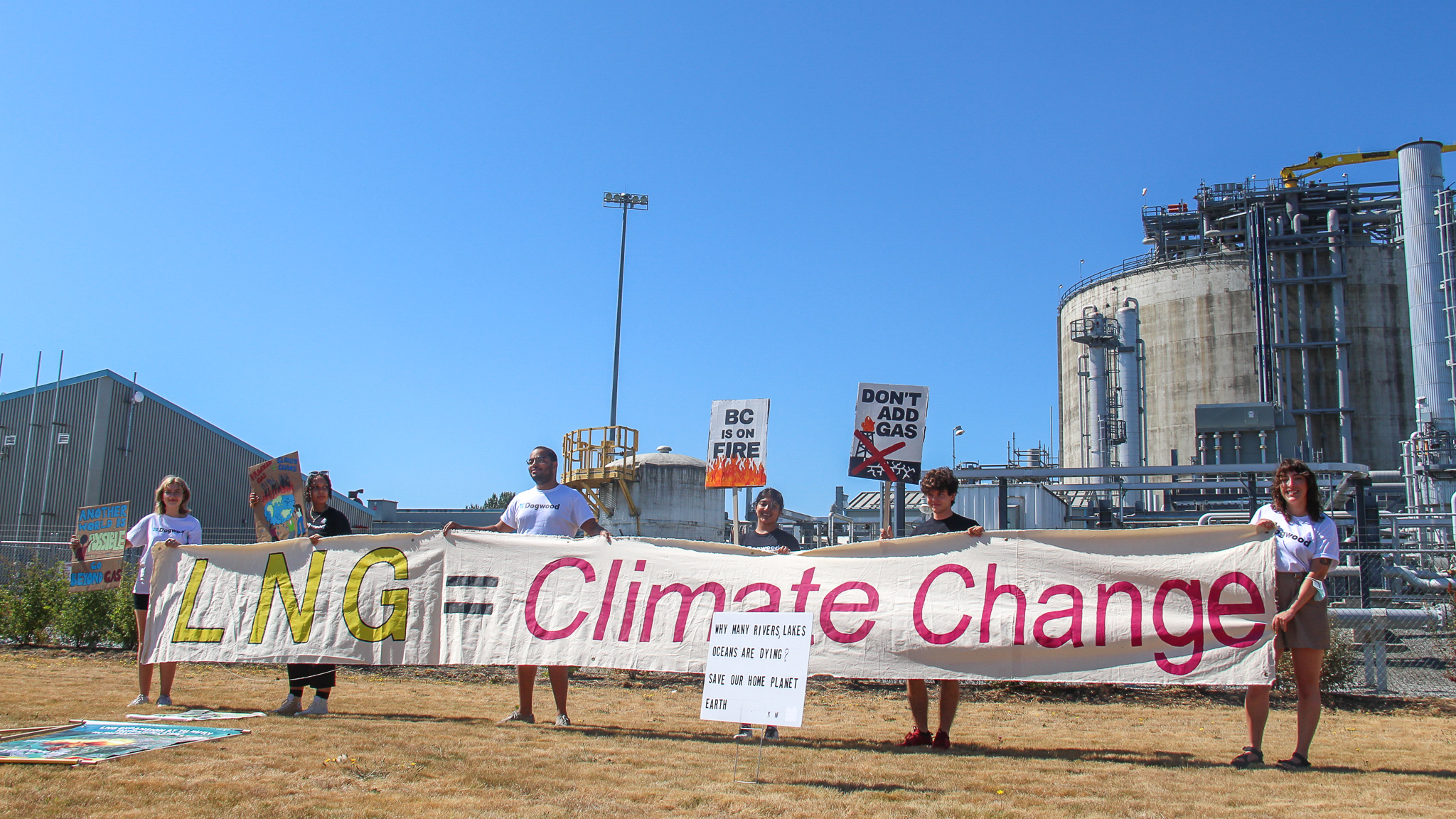 Tilbury LNG is a fossil fuel expansion project in an era where climate change is already wiping communities in British Columbia off the map. Therefore the burden of proof must be significant for FortisBC to demonstrate the climate claims it is making about the project. Liquefied natural gas (LNG) comes from fracking in Northeastern BC, an industry responsible for 20 per cent of the province’s carbon pollution, which has a legislated target to reduce its emissions 33 to 38 per cent by 2030. Approving Tilbury LNG would have a negative impact on numerous climate goals across multiple jurisdictions — that much should be obvious. Any increase in greenhouse gas emissions is inconsistent with regional, provincial and federal policies and should have resulted in the termination of the application before this review. 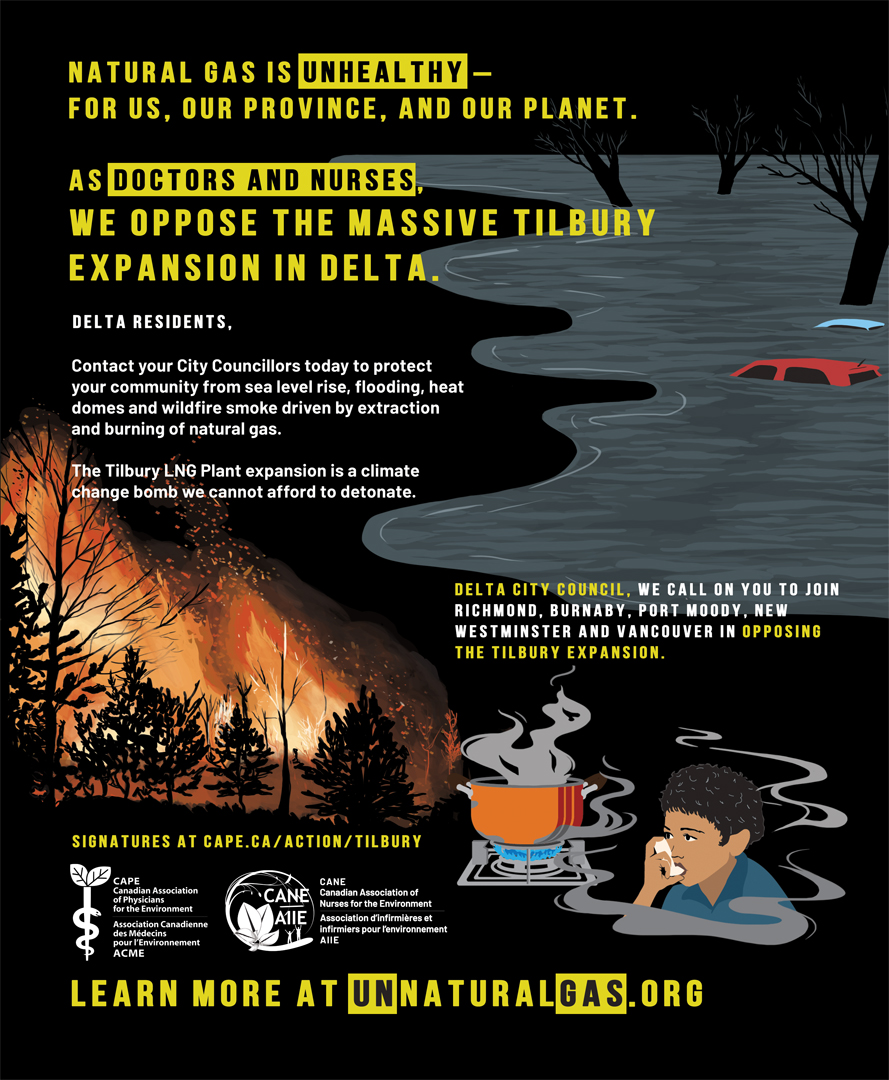 These draft application information requirements do require FortisBC to describe how Tilbury LNG will impact the provincial and federal governments’ ability to meet legislated climate targets. However, since neither government has provided detailed policies and measures for the oil and gas sector to meet its targets, there is simply not enough information for the proponent to claim it will be able to fit within either climate plan. Emissions reductions targets require credible steps to demonstrate how the industry will meet them. Given both governments have missed every climate target they’ve ever set for themselves, it’s simply not enough to say the existence of these goals negates the impacts of a new polluting facility and more upstream gas production. In fact, it is precisely the approval of projects like Tilbury LNG that would make it harder and could make it impossible for the oil and gas sector to meet the targets prescribed in provincial and federal climate plans. In addition to the BCEAO’s draft requirements, it is reasonable then to require the proponent to detail the uncertainty surrounding how the oil and gas sector plans to reduce emissions in line with its sectoral targets, including the risks of relying on carbon capture and storage technology and the likelihood of eliminating methane emissions from gas extraction, processing and transportation.

FortisBC claims potential reductions in carbon pollution from its customers outside of provincial jurisdiction justify the increased local and upstream emissions. Given the proponent’s argument for the project rests on that assumption, the BC Environmental Assessment Office must thoroughly interrogate any such claims of Tilbury LNG’s net benefit to the global climate and hold them to the most rigorous standards of evidence. Unfortunately, the draft application information requirements does not achieve this level of analysis. The BCEAO merely suggests it will require FortisBC to provide an explanation of how the project “might” result in GHG emissions reductions in Canada. It wants the proponent to provide a discussion of how the project “could” impact global GHGs, how it “might” displace emissions internationally and how it’s “likely” to result in global emissions reductions. Frankly, this appears to be more of an opportunity for FortisBC to highlight its public relations pitch regarding the project’s potential climate impacts and less of a thorough investigation of the evidence it has to support its claims.

For a credible review process, the BCEAO must request far more information from the proponent including but not limited to contracts that confirm the replacement of coal or bunker oil over the lifetime of the project; detailed plans from the companies providing the gas to accurately measure and eliminate methane emissions; global market analysis for LNG over the lifetime of the project in a world that ensures a 50 per cent chance of limiting global warming to 1.5 degrees Celsius; independent forecasts showing a timeline for hydrogen to replace LNG and risk of Tilbury’s customers locking in gas infrastructure; and annual production targets and local sourcing contracts for biomethane or syngas if the proponent intends for these products to play a role in its plans for net-zero by 2050.

IPCC scientists say it's 'now or never' to limit warming

One of the Wilderness Committee’s concerns with the approach described in the draft application information requirements is it does not reflect a 20-year global warming potential (GWP) for methane gas, but instead arbitrarily relies on a 100-year GWP. Comparisons of the greenhouse gas emissions of fossil fuels vary drastically depending on global warming potential chosen. Quantification of upstream fugitive methane emissions associated with the project will not consider them in the most relevant context for people who are currently experiencing the impacts of climate change. Given the proponent is trying to make a case for approval based on the need for drastic emissions reductions in the short-term, it’s prudent to also consider the impacts of pollution over the short-term. While Canada’s Strategic Assessment on Climate Change directs what is needed in terms of climate accounting under the Impact Assessment Act, recent reports from the IPCC have placed greater urgency on the need to reduce and eliminate methane emissions from oil and gas. It is well within the power of the BCEAO to take the most up-to-date science and evidence into account in its review process and order a more thorough accounting than earlier guidelines had previously intended.

How will this affect transition to renewables?

Finally, evaluation of Tilbury LNG’s climate impacts requires a broader perspective of the project in relation to transition timelines of the next several decades, rather than simply against the world’s current running total of annual greenhouse gas emissions. While this review should of course evaluate how the project will affect global atmospheric concentrations of carbon pollution in the year it’s built, a credible process would also project that relationship over the lifetime of the project. It may be true that LNG replaces coal or marine bunker fuel in the short-term (although this assertion must be verified and a full lifecycle comparison done), but it is unlikely that brand new gas-powered equipment will be replaced until the end of its useful life. That means over the long-term, any switch to LNG could prolong reliance on fossil fuels and prevent a transition to renewable electricity or green hydrogen. Climate disasters like the heat waves, wildfires and floods British Columbia is already experiencing will only get worse until the world stops burning fossil fuels. Regardless of its impacts on current emissions levels, Tilbury LNG will delay the day humanity stops putting more carbon pollution into the atmosphere than carbon sinks can absorb. It will enable fossil fuel combustion and therefore global warming to continue years longer than it otherwise would. That must be a central consideration for the BCEAO in its review, and the current draft application information requirements require no assessment of these impacts.

If the BCEAO wants a credible review process, it must demand solid evidence for the proponent’s broad claims around emissions and explore the full context of regional, provincial, federal and global climate goals across multiple timelines. Leaving this critical information out of its assessment would prevent the provincial and federal governments from making decisions in the public interest. The Wilderness Committee looks forward to engaging in the Tilbury LNG review process further in good faith and will encourage its members and the public to do the same