Why is Canada building a pipeline through a province on fire? 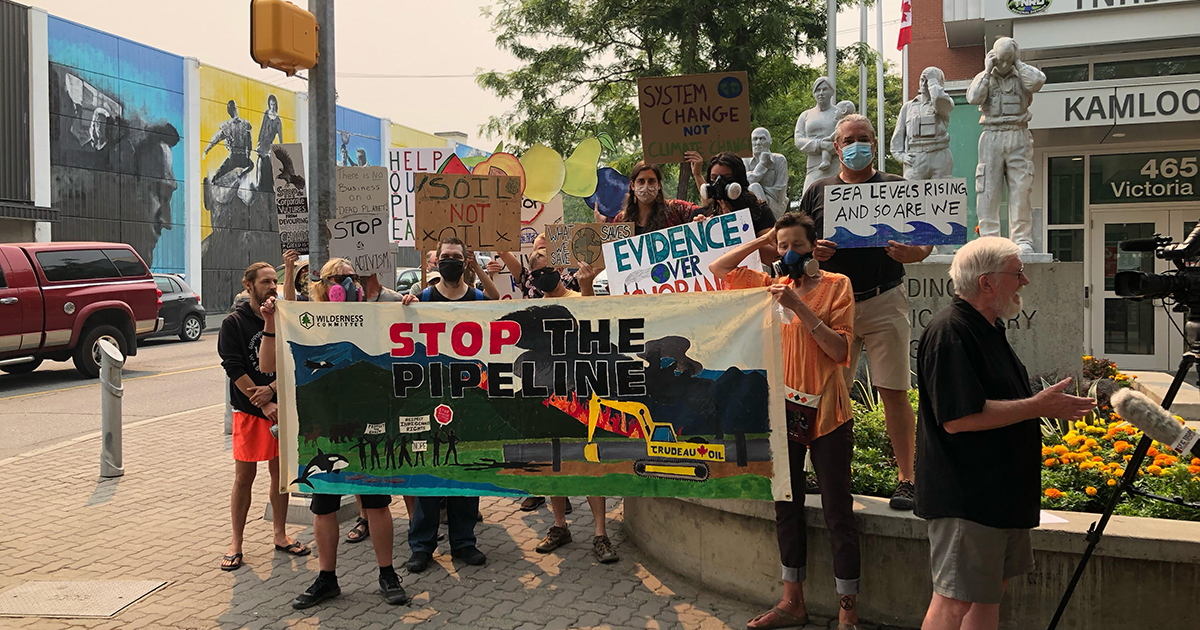 Drivers on the Coquihalla could feel the heat in their cars as they rushed to clear the highway before the July Mountain fire overtook it. Somewhere in the ashes is the route for the Trans Mountain pipeline, a project that would fuel the climate change that’s making these fires worse.

After a decade of fierce opposition to the project from a broad cross-section of British Columbians that eventually saw the federal government buy the pipeline, it’s now under construction but resistance continues. As hundreds of people died in a record heatwave, prolonged drought reduced crop yields by over a quarter and half the country spent all summer fleeing wildfires and choking on smoke, more Canadians are starting to realize that purchase was a profoundly bad decision.

Days before the federal election began, the federal government tried to justify the building of Trans Mountain saying they needed the revenue from the pipeline to pay for climate action. It was not a new talking point, but it got raked over the coals for such an incoherent stance.

Trans Mountain would enable 13 to 15 megatonnes of carbon pollution from the Alberta tar sands which already hosts the most polluting companies in Canada. Oil and gas production does more damage to the climate than our entire transportation sector, and it’s the nation’s only growing source of emissions. This pipeline would carry another 590,000 barrels of tar sands oil every day.

It’s crystal clear from reading the project’s construction schedules the pipeline is significantly delayed and costs must have risen substantially. According to an analysis from the Parliamentary Budget Office, if the pipeline is still under construction in 2023 it will be worth less than it cost to build. Even Trans Mountain’s website clearly shows construction at the Westridge Marine Terminal has already been delayed well past that point. Canadians will lose money on the pipeline — how much depends on whether the federal government forges onward as costs balloon or cuts our losses now.

Amazingly, despite Canada spending billions of dollars on it with zero transparency or accountability, none of the major parties’ platforms addresses the ballooning costs or mounting delays. While all of them promise to reduce emissions, none of them seem to realize any serious climate plan would render new pipelines useless. Growing oil production simply doesn’t square with the drastic, rapid cuts to carbon pollution scientists tell us are needed.

Since the federal government’s purchase of the pipeline, the Canada Energy Regulator and the International Energy Agency have both said new oil pipelines will not be filled if we are to reach net-zero emissions by 2050. In that context, Trans Mountain seems like one of those hastily-made government decisions made with all the wrong information.

So if the pipeline is financially underwater and the industry is not going to need it anyway, why are we still building it? Honestly, it could be as simple as politicians not wanting to admit they were wrong. But is it really preferable to be the government that built a boondoggle than the one that cancelled it? Because I have to admit I think that’s a stupid reason to continue pouring billions of dollars into this pipeline.

We need to face the facts: the world is actively trying to reduce its reliance on one of our largest exports. Washington and California, where most of the oil that currently flows through the Trans Mountain pipeline goes, both have policies to end the sale of gas-powered vehicles in the medium-term. Even the elusive Asian markets that the federal government claims are the reason for the expansion have exploding electric vehicle industries and targets for their adoption.

Canadians may end up with a costly, worthless, polluting steel tube that would need to be shut down a few short years after it comes online. That is unless the next federal government takes a meaningful look at the prospects and progress of this project and makes the right decision to walk away. Otherwise, Trans Mountain will be a monument to the hubris of the political class that built new fossil fuel infrastructure literally right through the fire.

Canada must take care of oil and gas workers and communities just like it took care of millions of Canadians whose workplaces had to shut down because of COVID-19 public health measures. Thankfully, there are far less people who work in the oil and gas industry. Still that’s a lot of families who need to know they have a place in this cleaner future we’re all building. We can offer skills retraining, job guarantees and early retirement for these workers and new forms of place-based economic development funding for their communities. It’s not an insurmountable challenge, but the sooner we get started the better.