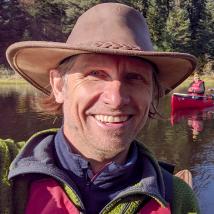 Eric (he/him) currently resides in Manitoba on Treaty One Territory and the homeland of the Métis Nation.

As the director of the Manitoba field office, Eric campaigns to protect the wild in Manitoba and beyond. Eric works from Treaty One Territory, Homeland of the Métis Nation. His first-hand knowledge of many wild spaces has instilled a deep appreciation for their beauty and value, strengthening his resolve to protect them. Eric first started at the Wilderness Committee as a canvasser before becoming a campaigner in 2006. Previous to that he was a publisher, photographer, director of a national sports organization, mechanic, carpenter and coach. Eric spent his youth exploring the wilderness east of Lake Winnipeg, starting with his first paddling trip at the age of four. Since then he’s journeyed through much of the wild spaces across these lands we call Canada and the US. He is raising the next generation of outdoor folk, his son North.

Check out some of the campaigns Eric leads: