Power Trip: The Truth Comes Out About Private Power 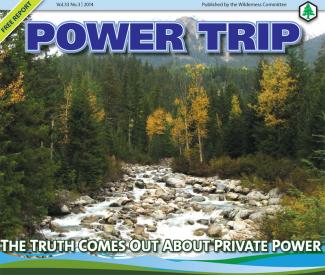 The move to exploit BC's wild rivers for private hydropower development has been fraught with controversy. Due to poor planning, a vast majority of river diversion projects are situated in fish habitat, and low environmental standards and lax government oversight have seen the industry beset by repeated environmental transgressions. Indeed, BC government staff revealed that as of January 2014, 18 of 24 river diversion plants in the South Coast region had "unsatisfactory" operating procedures.

In British Columbia, over 800 rivers and lakes have been staked by private power producers, and 75 rivers and creeks – including Big Silver, the Upper Lillooet, Ashlu and Kwoiek – have already been industrialized or are imminently slated to be developed. Fortunately, several recent (and surprising) developments have changed the dynamics around the race to dam and divert our wild rivers.

Read this paper to find out: