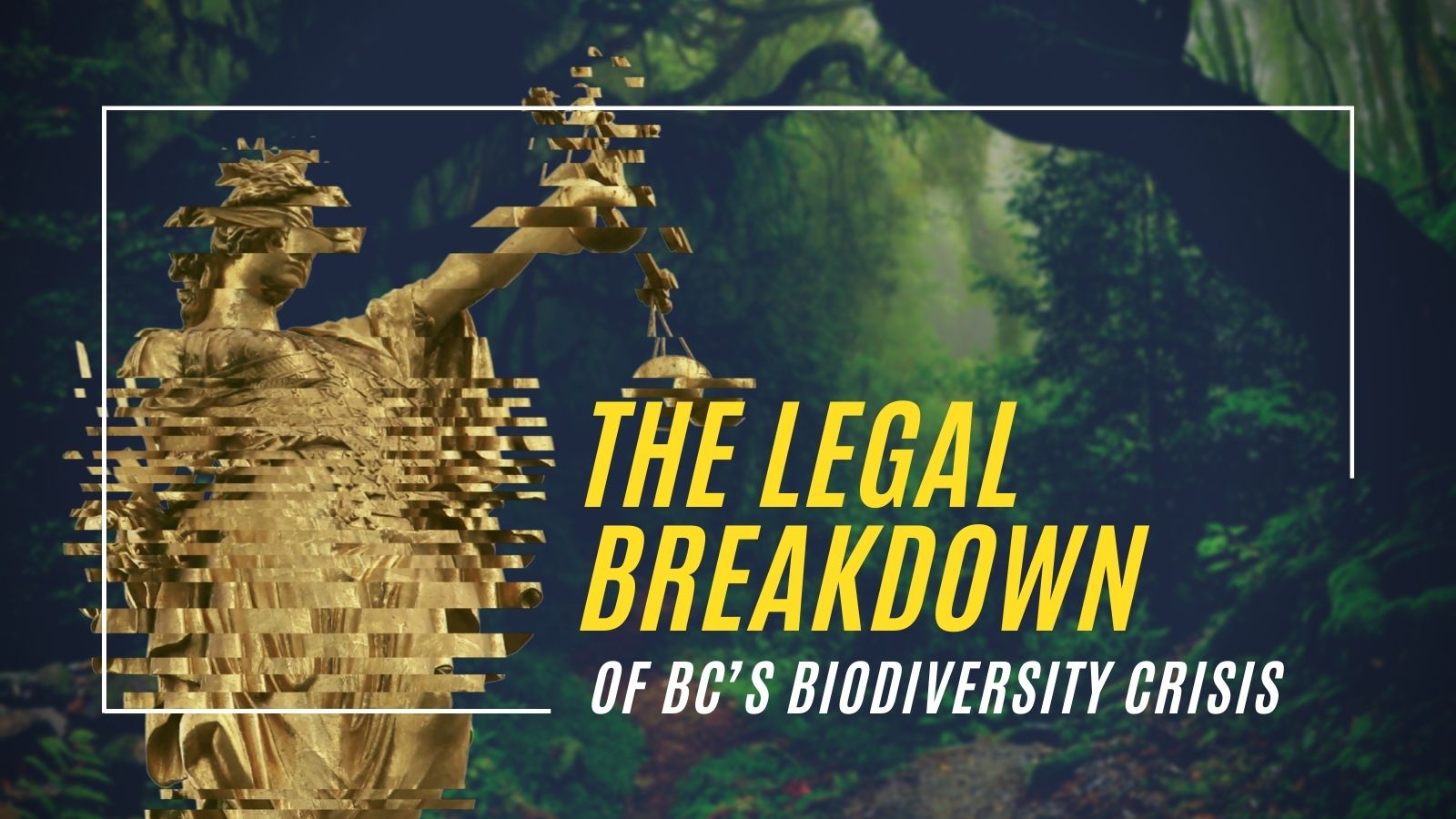 In Canada, there is a federal Species at Risk Act (SARA) but this act has many flaws. For one, it only automatically applies to species at risk located on federal lands, such as military areas, national parks, post offices and airports. For all species at risk located on non-federal land, SARA leaves the responsibility to the provinces to “effectively protect” their habitat. But provinces and territories often fail to do this. And when they do, the federal government has the option to issue a “safety net order” which enforces protection of the species and its residence on provincial or territorial land. Sounds great! But the federal government has never used a safety net order in the 17 years since the law was created. Therefore BC species at risk located on 94 per cent of the land are left completely vulnerable. In order to protect BC species at risk, we need our own law so no species is left behind.

There are three different “species at risk lists” for assessing species in BC. The first is the BC government’s conservation and data centre (CDC) list. The next two are lists that include all Canadian species at risk but can be filtered to just species residing in BC. One is created by the Committee on the Status of Endangered Wildlife in Canada (COSEWIC). This list is curated by scientific professionals and they give recommendations to the federal government on the status of species at risk. The last list is what’s known as the “legal list,” or Schedule 1 which is built upon the recommendations of COSEWIC. Once a species is added to Schedule 1 they receive protections under the federal Species at Risk Act. This is the list that carries the most legal punch.

As of 2020, there are 1,680 species in BC that are red or blue listed. Red means they’re endangered or threatened and blue means special concern according to the BC conservation and data centre. This includes species, subspecies, populations, varieties and communities.

The BC CDC list does not carry any legal weight. Since there’s no BC species at risk act, there’s no law to enforce the protection of the wildlife on this list.

The Committee on the Status of Endangered Wildlife in Canada is an independent advisory panel to the federal minister of environment and climate change Canada. They meet twice a year to assess the status of wildlife species at risk of extinction. Members are wildlife biology experts from academia, government, non-governmental organizations and the private sector responsible for designating wildlife species in danger of disappearing from Canada. They use science-based analysis to determine the risk status of Canadian wildlife. Their recommendations are passed to the minister but the minister doesn’t have to follow their recommendations. Because this list is science-based and free of political and industrial interference, it is the most appropriate list to use for an accurate snapshot of the status of species at risk in Canada. 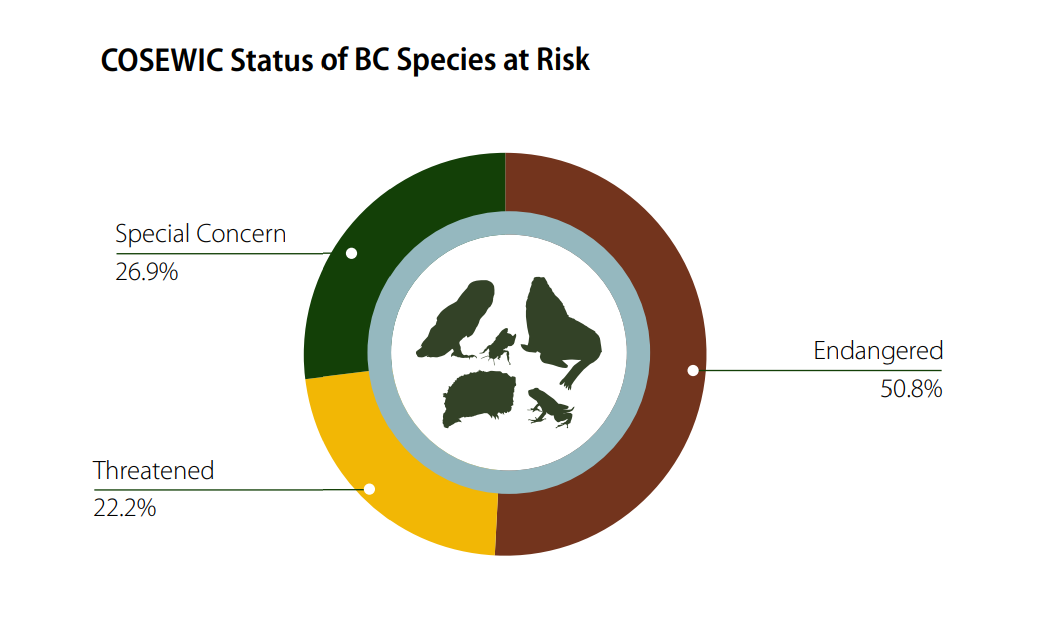 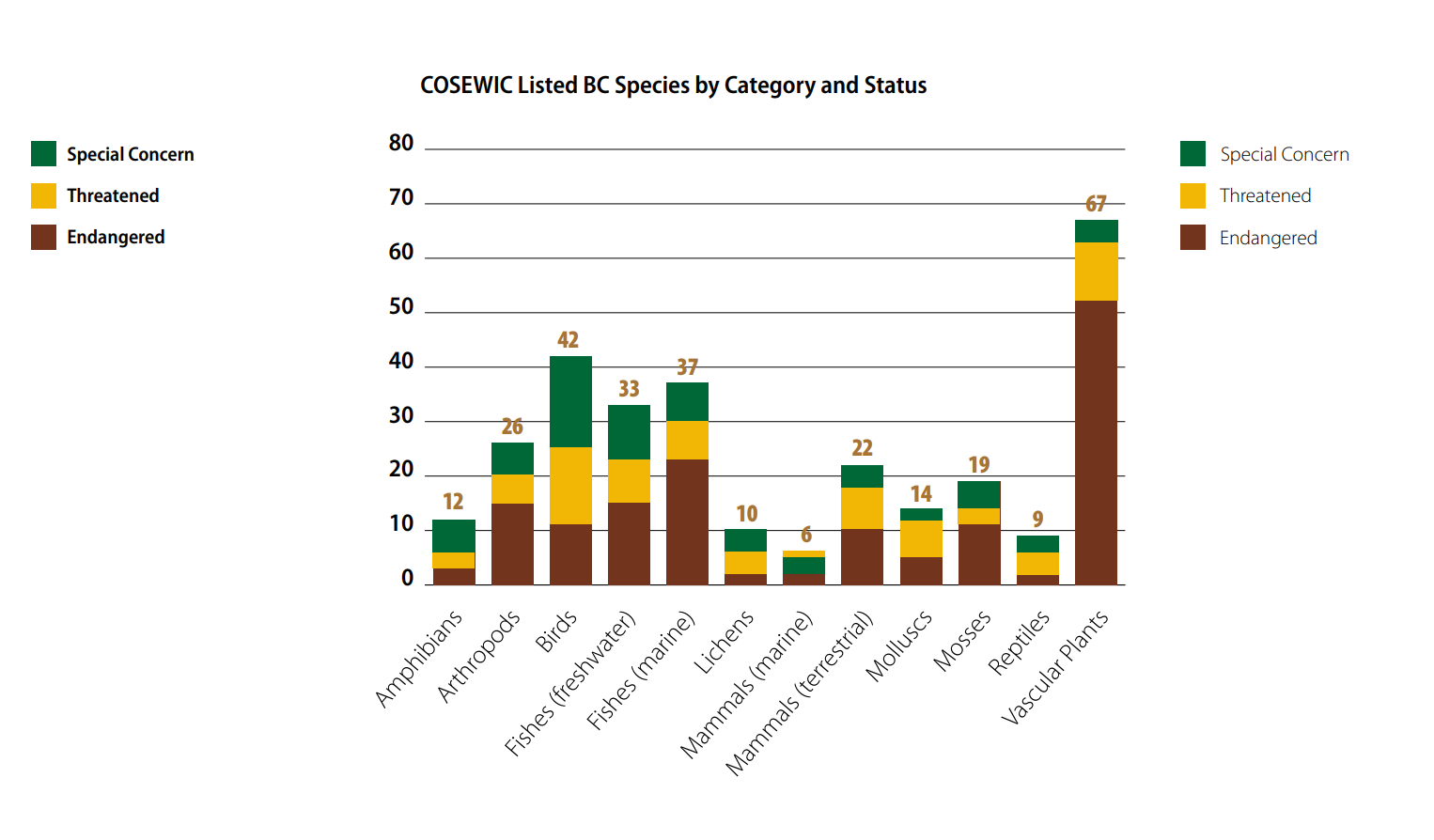 Many of the species at risk COSEWIC has listed have not made it onto the legal list under the federal SARA. Below is a representation of the percentage of species COSEWIC has assessed as at risk, but are not on the legal list. This shows a clear issue with the law that must be fixed. Further, this chart shows that the higher the risk category, the more likely they’re not listed.

The risk categories are as follows from highest to lowest: endangered, threatened and special concern.

For example, 79 per cent of species of concern are listed under SARA, meaning they’re legally protected. This is a much higher percentage than threatened and endangered species who are less likely to be legally listed. This could be because special concern species are not automatically protected from being harmed or having their habitat destroyed, making it less controversial to add them to the legal list. 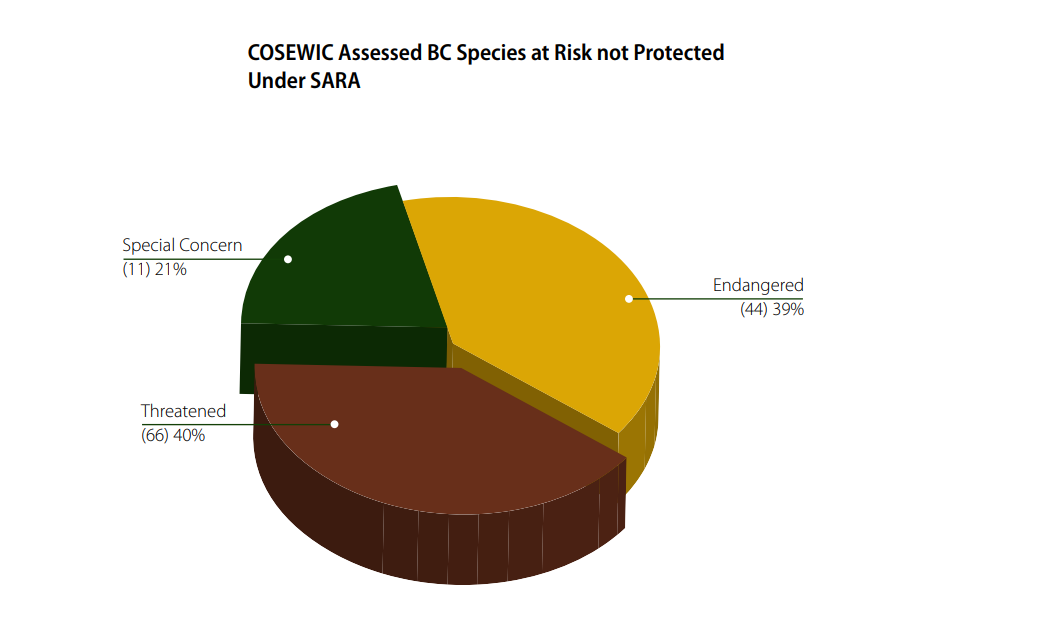 Species that do make it onto Schedule 1 aren’t necessarily on their way to recovery. For many species, no additional work is done. Once a species is added to the legal list, a recovery strategy, critical habitat mapping and an action plan are the next steps. But many species don’t end up with any of these critical next steps completed.

One of the foundational steps to recovering a species at risk is identifying their critical habitat. Every species needs a safe habitat in order to survive. It’s important to know where that habitat is so it can be protected. But, many species don’t have their habitat mapped, due to a lack of government action. As of 2020, throughout BC and the coastal waters of the Pacific, there are 248 SARA listed species (including separate populations) listed as endangered, threatened or special concern on Schedule 1. Of these only 89 have their habitat mapped compared to 159 that do not. 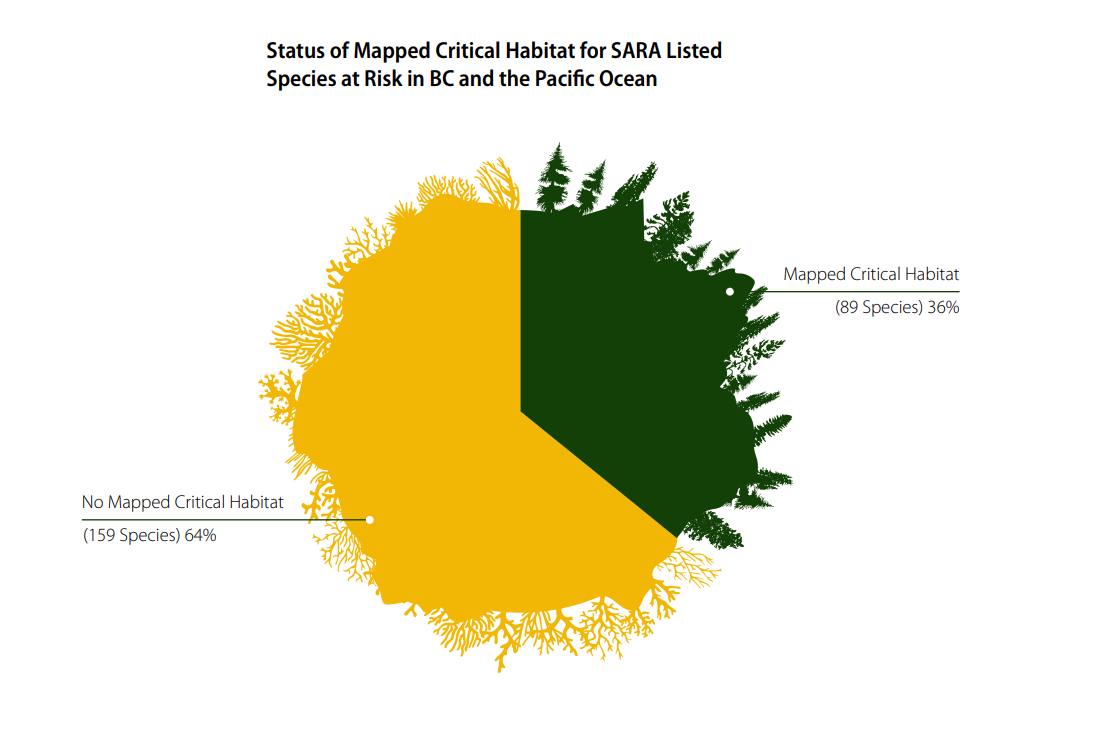 Once the habitat is identified, work can be done to restore, protect and implement other recovery measures within the habitat to help recover the species. Mapping critical habitat is essential to achieve recovery. Below shows the number of species by risk category with habitat mapped versus unmapped. 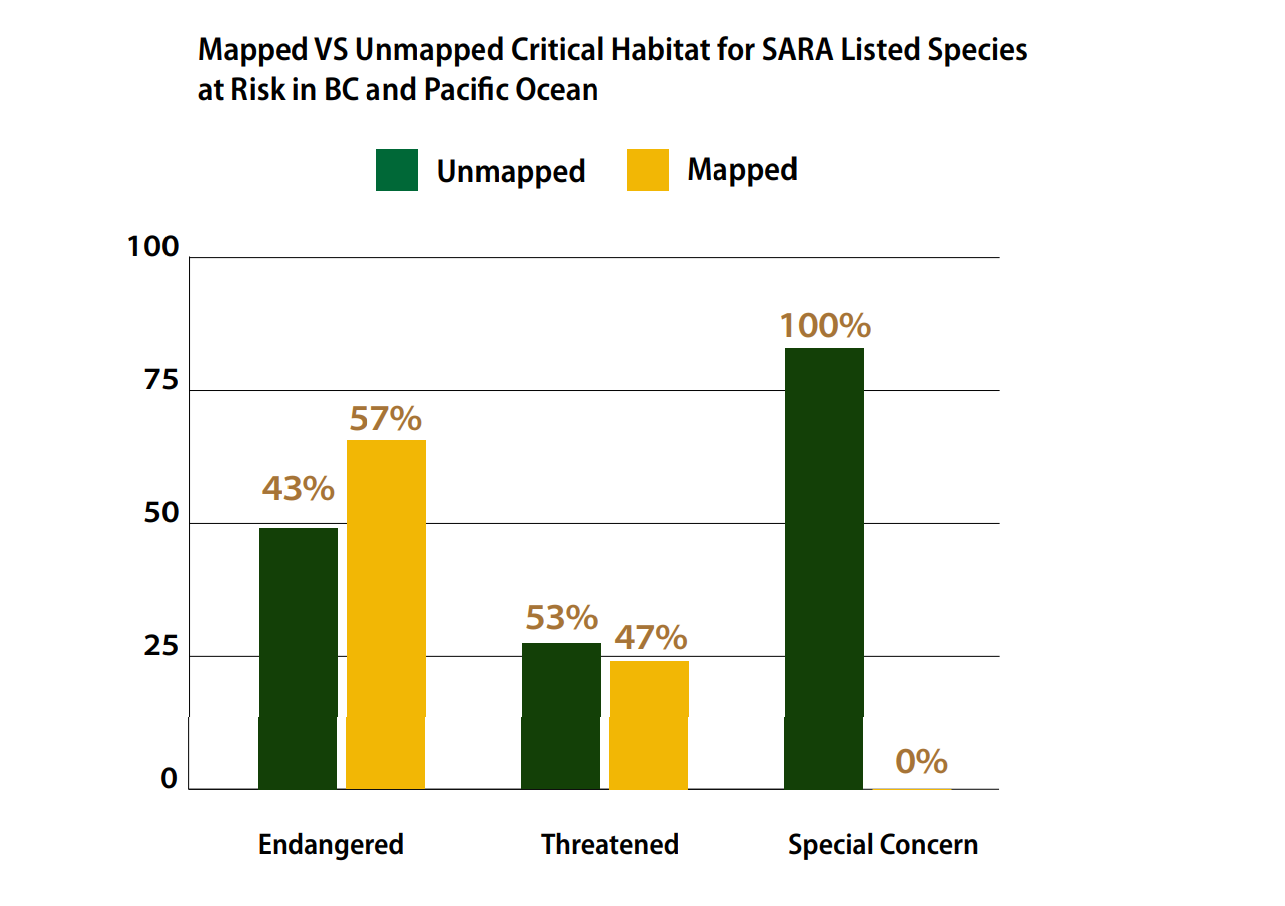 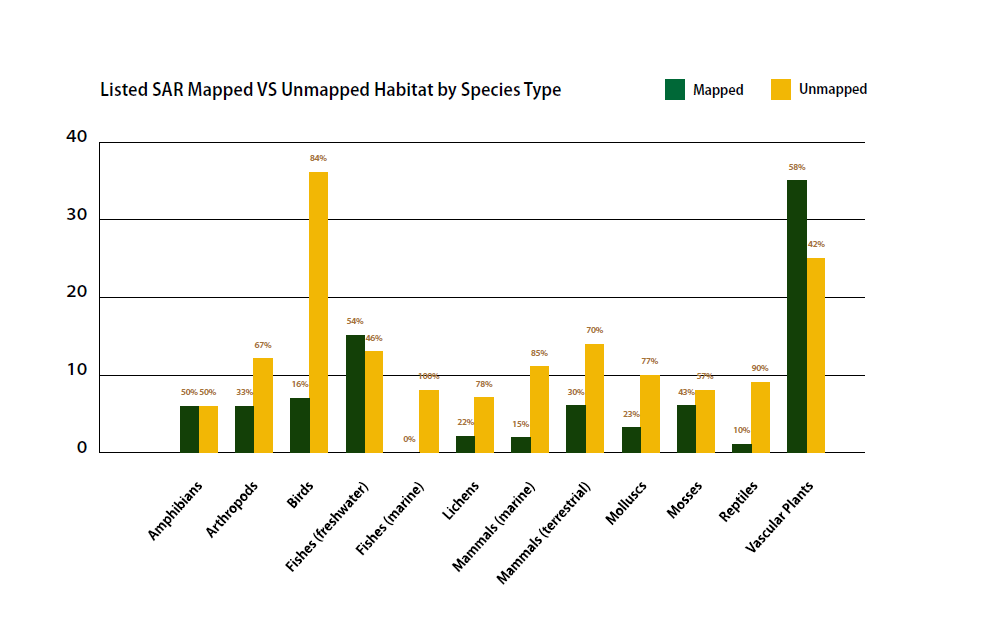