Full question: Current agricultural practices are allowing excess nutrients from fertilizers and manure to enter our waterways and eventually Lake Winnipeg. Will you commit to more stringent fertilizer and manure management plans for agricultural operations?

It is the government’s responsibility to provide support for farmers to implement more environmentally sound practices, including preventing excess nutrients from flowing into our waterways while ensuring there is strong regulation and adequate enforcement of management plans on site. We know all regulation regarding fertilizer and manure management must be science based – and that the proper regulation of fertilizer and manure management will be of great importance to the protection of our lakes, waterways and wetlands.

Our party has pledged to invest $502 million into cleaning Lake Winnipeg including $50 million for pollutant-reducing projects outside of improving the North End Water Treatment facility which is currently the single largest contributor of phosphorous into Lake Winnipeg.
We have also included working with landowners to hold back water and using best practices and technology to ensure that our agriculture sector isn’t contributing to the deterioration of our lakes.
Our plan is to ensure the protection of current wetlands as well as restoring many that have been lost as a part of our wilderness section.

The Lake Winnipeg Foundation, through their program to vastly increase the measurement of phosphorous levels in the waterways entering Lake Wiinnipeg, have identified hot spots where high levels of phosphorous are entering waterways which drain into Lake Winnipeg.  I believe we need to start by implementing plans to better understand the activities that are contributing to the hot spots and to develop and implement actions which can reduce the phosphorous coming into the waterways in these hotspots  Work in these areas can then inform actions which need to be taken more broadly.

The Green Party of Manitoba has policies in place to reduce the use of fertilizers and manage agricultural practices to benefit both nature and the farmers.

Yes, we have policies to reduce fertilizer use and manage manure more effectively.

Marshes and wetlands are our natural water filters. Wetlands are distinct ecosystems.  The water level can fluctuate throughout the year but it is noted for being primarily oxygen-free and made up of aquatic plants, with the ability to thrive in hydric soil.  They are important in modulating shoreline wave action, reducing the impact of flooding as well as they possess the ability to absorb pollutants, thereby improving water quality.  They improve biodiversity by providing a habitat for a wide variety of animals as well as having some species of plants and animals that do not occur elsewhere.  The fringe of wetlands at the edge of the lake protects excess nutrients from agriculture reaching the lake and prevents algal blooms that choke the lake of oxygen.  Strict limits of nutrient affluent into Lake Winnipeg must be instituted and fines levied for agricultural producers who violate those limits.

Current destructive agricultural practices are allowing excess nutrients from fertilizers and manure to enter our waterways and eventually Lake Winnipeg. Organic operators pay to have their manure management plans audited every year! All operations with manure management plans must pay to verify they are following environmental protections and begin the immediate reduction of synthetic fertilizer use.

The Green Party of Manitoba has policies to reduce the use of fertilizers and manage agricultural practices to benefit both nature and farmers. As someone who grew up on a farm, I believe this is absolutely necessary for the long-term sustainability of our agricultural sector, as well as our planet.

Lake Winnipeg has been declared the world’s “Threatened Lake of the Year for 2013” by the Global Nature Fund, an international environmental protection foundation;

• excess phosphorus is entering the lake from inadequately treated sewage and from agricultural run-off, causing toxic blue-green algal blooms which are poisonous to vertebrates, including humans, and which choke out other life forms and undermine the balance of the lake’s food web; and
• lax sewage treatment regulations and agricultural run-off and are the main culprits creating the lake’s problems; Be it resolved: The Green Party of Manitoba supports increased efforts to reduce phosphorus run-off into Lake Winnipeg, which would include:
• mandating the strengthening and enforcement of manure management regulations for hog barns, chicken barns and feedlots in the Red River Basin to eliminate manure run-off;
• mandating proper sewage treatment and water testing by all municipalities in the Lake Winnipeg watershed to eliminate the contamination of waterways; and
• banning mining of peat lands, which are the filter for Lake Winnipeg; Be it further resolved: The Green Party of Manitoba urges the Province of Manitoba to take a stronger lead in pressing the federal government and other government bodies responsible for the Lake Winnipeg watershed to take urgent action towards establishing and maintaining effective stewardship for the lake. Watershed Management & Wetland Restoration Approved 2015 Whereas:
• Manitoba is experiencing higher levels of precipitation year-round, likely due to climate change;
• the disappearance of wetlands over the last century and the construction of drainage ditches has resulted in higher and faster flows of water off the land into rivers and lakes which, in turn, flood their banks and cause damage to property and the lands flooded;
• the restoration of wetlands on privately owned farmland would reduce the likelihood and degree of flooding in rivers and lakes; and
• farmers would require financial incentives to convert some of their farmland back to wetlands;

Be it resolved: The Green Party of Manitoba supports:

• policies and practices that provide farmers with incentives to create and maintain wetlands on their property, including: o reducing the current farmland municipal assessment portioning rate of 26% on farmland converted and maintained as wetlands, and increasing it on land left in production; and o providing farmers with grants to build water control and dam structures. 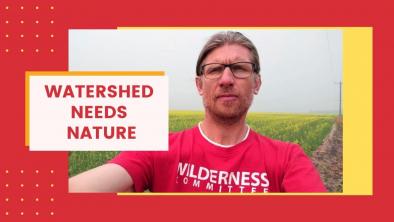