The government agency at the centre of B.C.’s old-growth logging showdown 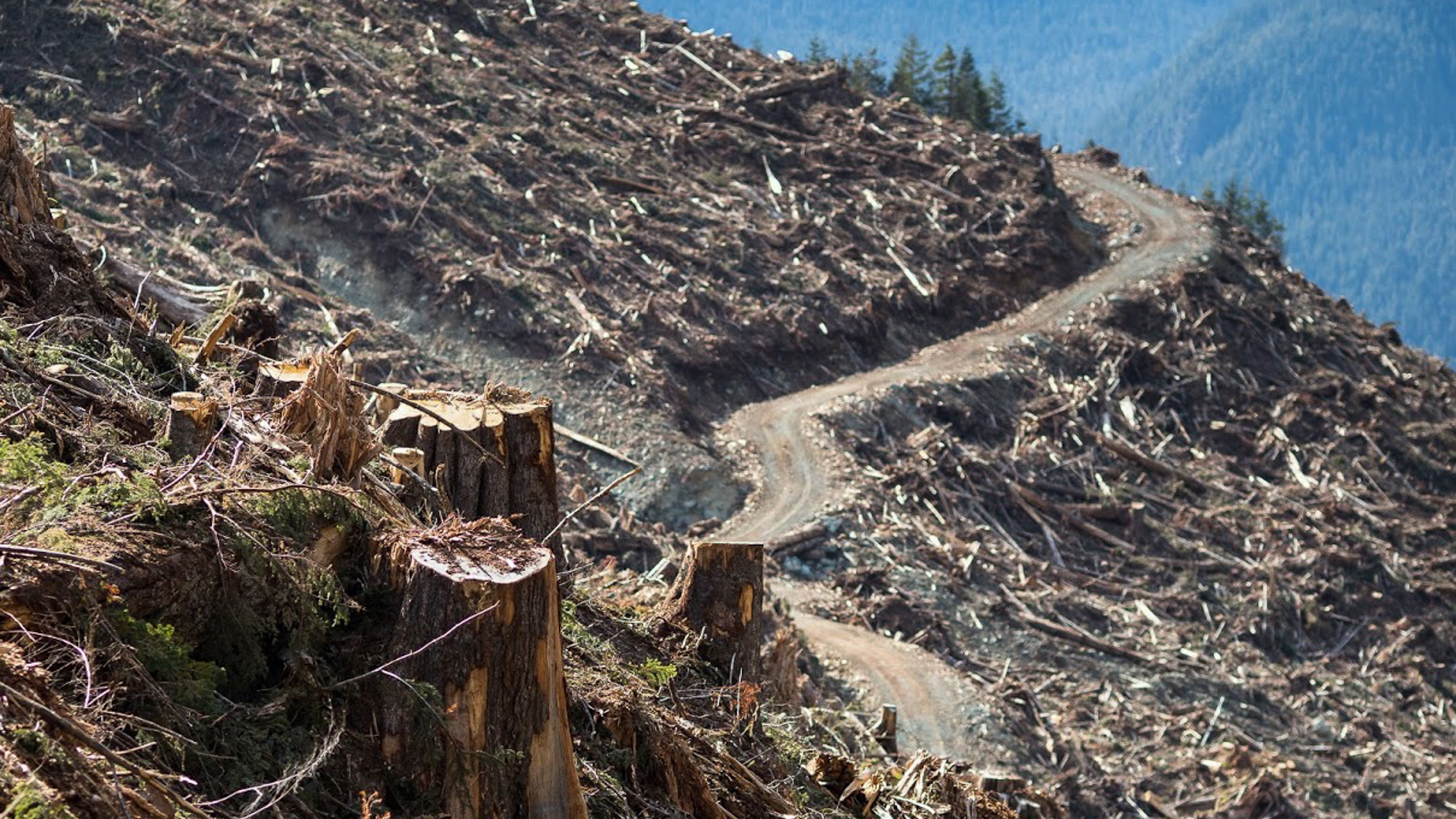 BC Timber Sales has become a lightning rod for controversy, with many expressing dismay over the NDP’s ‘business as usual’ approach to logging

The expanse of ragged stumps, stretching up a steep slope beside Schmidt Creek, on northeast Vancouver Island, serves as a graphic example of controversies over old-growth clearcuts approved by BC Timber Sales and a growing push-back from those who want better protection for intact forests.

The clearcut, above the world-famous Robson Bight orca rubbing beaches, has drawn the ire of conservation groups, whale biologists and First Nations provoking questions about how BC Timber Sales is assessing parcels of old growth for auction.

BC Timber Sales, which was created in 2003 by the Liberal government, manages 20 per cent of the province’s annual allowable cut, making it the biggest tenure holder in B.C. This year, the government agency plans to auction off about 600 hectares more old-growth forest on Vancouver Island, an area about 1.5 times the size of Stanley Park.  The agency has plans to auction off another 8,800 hectares in future years.

Old-growth trees are at least 250 years old and are prized by timber companies. As they become increasingly rare, BC Timber Sales is auctioning off parcels close to communities or recreation areas, meaning conflict is more likely, said Jens Wieting, Sierra Club BC’s forest and climate campaigner.

“They are running out of places to find timber where they can log without conflict, so they end up pursuing what I call extreme old-growth logging,” Wieting told The Narwhal.

Floods, droughts and fires are also shining a spotlight on the impacts of climate change, made worse by logging.

The mandate for BC Timber Sales puts the standalone agency in a straitjacket, Wieting said.

“Auction 20 per cent of B.C. volume no matter what. So, instead of using BC Timber Sales to develop and implement best practices in the midst of climate and species emergencies, they behave like a machine designed with a single purpose: find the fibre,” he said.

That is not how BC Timber Sales sees its mandate and, in an emailed response to questions from The Narwhal, a spokesperson said forestry practices are rooted in the precautionary principle and failing to auction off 20 per cent of the allowable annual cut would “put the integrity of the timber pricing system at risk.”

‘This is being done by the government of B.C.’

Still, there is no doubt that many recent logging decisions made by BC Timber Sales have provoked community outrage.

In addition to the Schmidt Creek logging, controversies include clearcut logging in the Skagit Doughnut Hole, beside Manning Park, which brought protests from the U.S and accusations that B.C. was breaking an international treaty; plans to log the old growth adjacent to Juan de Fuca Provincial Park, a proposal that is now on hold to allow consultations with the operator of a nearby eco-lodge; and clearcut logging in the Nahmint Valley, west of Port Alberni, where one of the biggest Douglas fir trees in Canada was felled, despite objections from conservation groups.

“The fact that this is being done by the government of B.C. should make everyone’s blood boil,” said Torrance Coste, Vancouver Island campaigner for the Wilderness Committee.

At the Schmidt Creek site, the immediate fear is that landslides and silt will harm the beaches where threatened northern resident killer whales rub themselves on the smooth pebbles.

“When you take that much wood and forest off a hillside, it’s a physical certainty that there will be earth erosion either from a major rainfall or from cumulative erosion,” said Mark Worthing, a Sierra Club BC climate and conservation campaigner, who visits Schmidt Creek regularly and dives in the water around the rubbing beaches.

When Worthing visited Schmidt Creek in June he was horrified to see the aftermath of logging, which had been carried out by Lamare Group of Port McNeill. The timber rights had been bought at auction last year from BC Timber Sales by Super-Cut Lumber Industries of Langley for more than $13 million.

“It was like a punch in the gut. They are just hammering this poor little valley,” Worthing said.

Renowned killer whale researcher Paul Spong, whose OrcaLab research station is on nearby Hanson Island, believes the logging will inevitably affect the rubbing beaches, which he describes as a massage parlour for whales, and he fears the cultural activity, passed down through generations of whales, could be disrupted.

There are already changes to the beaches and observers say whales are visiting for shorter periods of time.

It is difficult to understand why BC Timber Sales would approve logging in the area, especially as the Robson Bight Ecological Reserve was created in 1982 largely to protect the rubbing beaches, Spong said.

“We are very concerned because it is so central to the whales. … It’s outrageous that they are logging old-growth trees on steep slopes. I think they should just be left alone. It’s just common sense when you’re coming to the last of the old growth,” Spong said.

In an emailed statement, BC Timber Sales told The Narwhal  the beaches were examined in 2016 by a regional geomorphologist who concluded that “carefully planned harvesting in Schmidt Creek is unlikely to affect the rubbing beaches.”

Initial observations suggest the beaches are eroding due to wave action, likely because of sea-level rise and severe storms, and there is no evidence of sediment affecting the beaches, the statement says.

While opponents of the clearcutting say silt will inevitably wash down on to the beach, BC Timber Sales says the logging is taking place in a side valley on slopes that are not directly above the beaches and that the Ecological Reserve includes 467 upland hectares, which protect the orca habitat.

The thorny question of Indigenous consent

Then there is the complicated question of Indigenous consent, with critics claiming that logging companies and BC Timber Sales are picking and choosing which Indigenous groups to consult.

Chief Rande Cook, known as Makwala, who heads the Ma’amtagila First Nation, said Schmidt Creek is in Tlowitsis-Ma’amtagila territory and he was devastated by the logging.

“I have never seen so many yellow cedar logs and there were some culturally modified trees that were cut down,” said Cook, who was not consulted about the logging plans.

There are long-standing differences of opinion between the Tlowitsis and Ma’amtagila people, Cook said.

“These people only want to consult with the First Nations they know they can get a pro-business outcome with,” he said.

In a statement, BC Timber Sales said the area had an archaeological overview assessment, a member of the Tlowtsis First Nation took part in field work during preliminary field reconnaissance and no culturally modified trees or areas with archaeological potential were identified.

The statement also said BC Timber Sales has adopted strategies to protect suitable red and yellow cedar for cultural purposes and to protect the province’s biggest trees, meaning more than 300 cedar and 66 legacy trees have been protected from harvesting, says the statement.

Jobs and money are at the heart of many of the decisions and BC Timber Sales says that “approximately 8,000 people are directly and another 10,000 people are indirectly employed as a result of BCTS’ auction of timber, as well, the net revenue generated from these auctions are returned to the government so as to support many of the programs the government offers the citizens of B.C. Curtailing BCTS operations would have significant impacts on all British Columbians.”

But, more than twice the number of British Columbians work in tourism than in forestry and, on the streets, there are demonstrations demanding that the province halt old-growth logging, backed by a petition organized by Sierra Club BC and Leadnow, signed by 20,000 people. A letter last year from 223 international scientists urged the province to take immediate action to protect B.C.’s temperate rainforest and the B.C. Green Party is among the groups asking for a moratorium on old growth logging on Vancouver Island.

Sonia Furstenau, Green Party house leader, finds it disappointing that old-growth logging is continuing at the same rate as under the previous Liberal government.

“While there seems to be an acknowledgement that the world and conditions have changed very quickly, the practices aren’t (changing),” Furstenau told The Narwhal.

She’d like to see community forests form the basis of future forest policy.That would allow decisions to be made with input from residents and First Nations so the community is not undermined by decisions made at the provincial level, Furstenau said.

Climate change also needs to  be factored into all decisions, she added.

“We can’t just continue with business as usual and then see what happens. We know what’s going to happen,” she said.

The B.C. government is asking for input until July 15 to improve the Forest and Range Practices Act and the University of Victoria Environmental Law Centre, in a report for Sierra Club B.C., is calling for the same level of protection used in the Great Bear Rainforest to be used as a model for all the province’s forests — something the NDP included in its election promises.

“The B.C government should partner with the federal government to enable Indigenous Protected and Conserved Areas and contribute to the international and national commitment to protect 17 per cent of the land by 2020,” it says.

Many are puzzled that logging practices have not changed under the NDP. TJ Watt, co-founder of the Ancient Forest Alliance, believes one difficulty is that there have been few staff changes within the Forests Ministry.

“I think the NDP is being given the same information around the incorrect idea that old-growth forests aren’t endangered and there’s nothing to worry about … when, in fact, we know that is not the case,” he said.

Furstenau agrees there has been little change within the ministry. “It’s very hard to change course in a radical or transformative way when you are still getting advice from the same people,” she said.

Estimates of the remaining old growth in B.C and the amount that is protected differ wildly, mainly depending on how old growth is defined.

The Environmental Law Centre report says that, across the province, in high-productivity areas, such as valley bottoms, less than 10 per cent of the original old growth remains and an even smaller amount is formally protected.

“On Vancouver Island, only about a fifth of the original productive old-growth rainforest remains unlogged. More than 30 per cent of what remained standing in 1993 has been destroyed in just the last 25 years,” it says.

Many of the contentious areas are on Vancouver Island and Forests Minister Donaldson has said that 50 per cent of old growth on Vancouver Island, or more than 520,000 hectares, is protected. But Wieting counters that Donaldson is referring to half the remaining old growth — therefore, in a bizarre twist, the more old growth that is logged, the higher the percentage of protected forest.

Watt said provincial figures include low-productivity forests that grow at high elevation or in bogs.

“Almost 80 per cent of the original productive old-growth forest and over 90 per cent of the low-elevation, high-productivity stands where the largest trees grow has already been logged,” Watt said.

Read the original article by The Narwhal by clicking here. 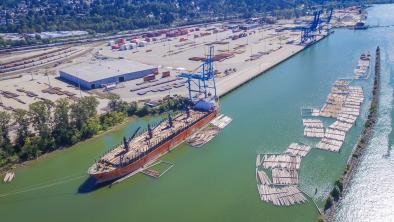 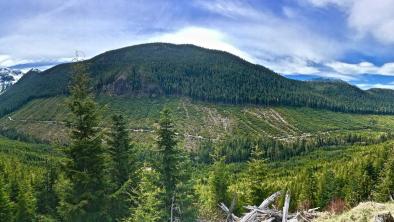