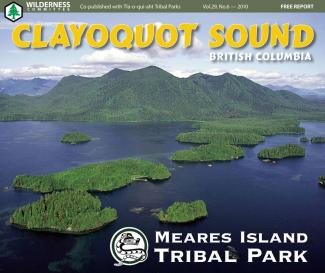 Rising up from the ocean, the emerald green ancient forests of Meares Island form the backdrop of the tourist and fishing town of Tofino, BC, Canada. Situated in the heart of Clayoquot (pronounced "Klak-wot") Sound, Tofino is on the west coast of Vancouver Island and is where the Trans Canada Highway hits the wideopen Pacific Ocean. As anyone who has visited Clayoquot Sound knows, this place is a symphony of nature connected to the rest of Canada by a ribbon of blacktop.

To fend off impending logging plans, Meares Island was first designated a "Tribal Park" on April 21, 1984 by the Tla-o-qui-aht First Nations, supported by its neighbours, the Ahousaht First Nations. Meares Island's 8,500 hectares of spectacular ancient forests make this tribal park a favourite with west coast visitors.