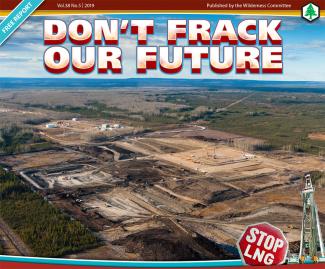 There's nothing natural about fracking

From the eastern slopes of the Rocky Mountains in northern B.C. and Alberta you can see a vast swathe of boreal forest, pockmarked with tens of thousands of fracking wells, seismic lines, access roads and wastewater ponds. These alien hieroglyphs etched into the landscape stretch to the horizon and beyond. Underneath lies the Montney shale formation, the epicentre of the fracking industry in Canada.

Hydraulic fracturing, commonly known as fracking, uses pressurized water, sand and a cocktail of chemicals to shatter shale rock deep below the Earth’s surface and release oil or gas stored inside. These wells are drilled every few hundred metres, using an enormous amount of water from local rivers and lakes, with the leftovers dumped in toxic pits.

Over 200,000 fracking wells have been drilled across Canada, mostly into shale gas deposits in northeastern B.C. and central Alberta. Along the U.S. border, Saskatchewan and Manitoba also hold a portion of the Bakken shale formation that is fueling a shale oil frenzy in North Dakota. On the east coast, Quebec, New Brunswick and Nova Scotia are home to shale gas and oil deposits. All three have moratoriums — albeit fragile ones.

These moratoriums are a response to strong public concern about the impacts of fracking — as numerous as they are dangerous. Chief among them are worries about water, both quantity and quality. This industry sucks water out of local ecosystems and turns it into toxic fracking fluid to be left underground or stored in wastewater ponds, posing severe health risks to nearby communities.

Perhaps most alarming is the industry’s staggering impact on the global climate. Fracked gas is methane, an extremely potent greenhouse gas. Leaks from fracking operations are mostly behind a massive spike in levels of this gas in the atmosphere and scientists say we need to get this industry under control.

There are too many impacts to detail in this report. Seismic lines and access roads fragment the habitat of threatened boreal caribou, leaving them more vulnerable to wolves. Flaring of excess gas releases harmful chemicals into the air. Ranchers and hunters report poisoned livestock and wild game. Fracking even causes earthquakes.

What’s clear is this industry is operating almost entirely in the dark. An astonishing lack of research and data means we don’t know the full extent of the damage fracking is doing. At the same time, regulators are more than happy to allow their friends in the industry to skirt the rules.

With liquefied natural gas (LNG) proposals on both coasts requiring tens of thousands of new fracking wells, we urgently need to shed some light on the threat of fracked gas. At the very time we need to be phasing out this fossil fuel, our governments plan to spark an explosion of new drilling. Thankfully, everyday citizens like you and I won’t stand for it.

Like the first article? Click here to read the full report! Action you can take is found on the back page of the report.