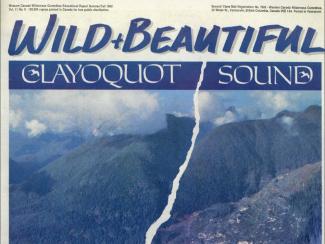 This is a 1992 Wilderness Committee education report about the campaign to protect Clayoquot Sound, which is centrally located on the west coast of Vancouver Island and is one of the most scenically beautiful and awe-inspiring areas in the world. It's 260,000 ha of forested mountain slopes, valleys and islands comprises the largest remaining expanse of temperate ancient rainforest on Vancouver Island and one of the largest tracts in the world. Because much of Vancouver Island had already been heavily logged, the pressure to clearcut the rest of Clayoquot Sound's wilderness was very is strong in 1992. Government processes such as the Clayoquot Sound Sustainable Development Strategy (CSSDS) had failed to resolve the conflicts between the multinational logging companies and the environmentalists in the area.
In 1993 the campaign moved forward when the Megin Valley and other surrounding ancient forests were protected within an expanded Strathcona Provincial Park. See our History and Achievements page.
In 2000 the Clayoquot Sound UNESCO Biosphere Reserve was designated, but many old growth forested areas remained open to logging. The Wilderness Committee continues to work with our allies to see all of Clayoquot's intact forested valleys and islands protected from logging.