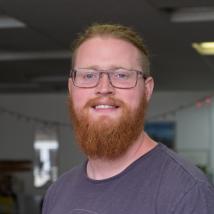 Peter mobilizes communities against destructive fossil fuel export projects and builds political will for a just transition to a zero-carbon economy. Peter works from the unceded Coast Salish Territories. For him, working at Wilderness Committee is like joining a big family, one with a long and storied history of butt-kicking for the planet. He feels lucky to have found a job that aligns with his values and allows him to meet so many fantastic, like-minded people. Before the Wilderness Committee Peter hosted his first protest at the age of 16, he’s a longtime advocate on climate change working as a journalist specializing in environmental politics. One of his most profound experiences with nature was when he was out in the Gulf Islands for work, and during a midnight paddle, he was caught up in a light display from bioluminescent plankton in the bay. At that moment he experienced a sense of insignificance, caught between the natural glow in the dark water and the Milky Way stretched above him.