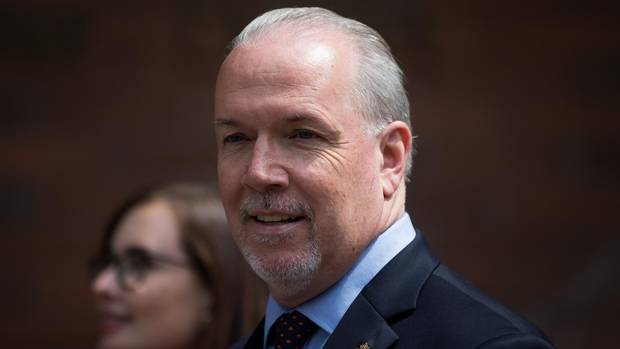 B.C. NDP Leader John Horgan has tackled one of the most divisive wildlife issues in the province by promising his government will end the trophy grizzly bear hunt if elected next spring.
Hoping to win broad support for a policy that may be a hard sell in rural ridings, Mr. Horgan is proposing to make it illegal to kill a grizzly for its head and hide, but legal to shoot one for its meat.
“It’s not about being opposed to hunting. It’s about being opposed to the grizzly bear trophy hunt and only the grizzly bear trophy hunt,” Mr. Horgan said at a press conference on Thursday.
He acknowledged that if hunting grizzly bears for food is allowed, trophy hunting might continue, because people might be able to get around the ban by taking the bear meat home.
But he said regulations could make such abuse unlikely.
The New Democrats banned grizzly hunting when they were in government in 2000, but lost support in rural ridings. The Liberals swept to power in the 2001 election and ended the ban.
Mr. Horgan said he thinks a carefully crafted ban on the trophy hunt would have wide support, including among hunters.
“The people of British Columbia are opposed to the trophy hunt of grizzly bears. That’s been made abundantly clear in poll after poll after poll,” he said. “I believe as we go into the next election, it’s important the people of British Columbia know that New Democrats stand against the hunting of grizzly bears for trophies.”
But Forests, Lands and Natural Resource Operations Minister Steve Thomson rejected the NDP plan, saying it is not workable and is not based on wildlife science.
“The problem with this is it’s the NDP trying to be all things to all people. I’m not sure how they manage a process where they call for a ban on trophy hunting and then continue to allow hunting [for meat],” he said. “It’s kind of a hollow promise. In reality, there will be many opportunities for the hunt to continue.”
He said the Liberals would continue to allow trophy hunting in areas where the bear population is healthy.
Green Party Leader Andrew Weaver said the NDP did not support him when he proposed legislation to restrict the trophy hunt by requiring all hunters to carry out the meat when they kill a bear.
“I’m grateful they’ve copied what I’ve done, but where were they when I brought in that private members bill two years ago?” he asked.
Mr. Weaver said if his bill had been adopted, it would have effectively ended the trophy hunt, because few people are interested in grizzly bear meat.
Jesse Zeman, a program manager of the B.C. Wildlife Federation, said hunters who shoot grizzly bears for food should be allowed to continue.
“It’s good,” he said of bear meat.
He said the BCWF, which represents about 50,000 hunters and anglers, supports requiring hunters to retain the meat of animals they shoot.
Ian McAllister, executive director of the conservation group Pacific Wild, called the NDP proposal “a step in the right direction” because it targets trophy hunting.
But he said allowing bears to be hunted for their meat is a mistake.
“We think this is just a loophole to continue the trophy hunt under the guise of food hunting,” he said.
Scott Ellis, executive director of the Guide Outfitters Association of B.C., said the NDP approach is not based on scientific wildlife management.
“We’re disgusted when politics gets [priority] over science,” he said.
Mr. Ellis’s organization represents hunting guides, many of whom offer a trophy grizzly hunt for about $14,000.
Grand Chief Stewart Phillip of the Union of B.C. Indian Chiefs said the NDP is doing the right thing.
“It is barbaric just to shoot an animal for its head,” he said.
B.C. has an estimated 15,000 grizzly bears. Hunters kill about 250 a year.
Joe Foy, a director of the Wilderness Committee, praised the NDP policy, saying thousands of bears have been shot since the Liberals lifted the hunting ban.
More from this campaign