‘This is something to celebrate’: B.C. defers logging in home of Canada’s last three wild spotted owls 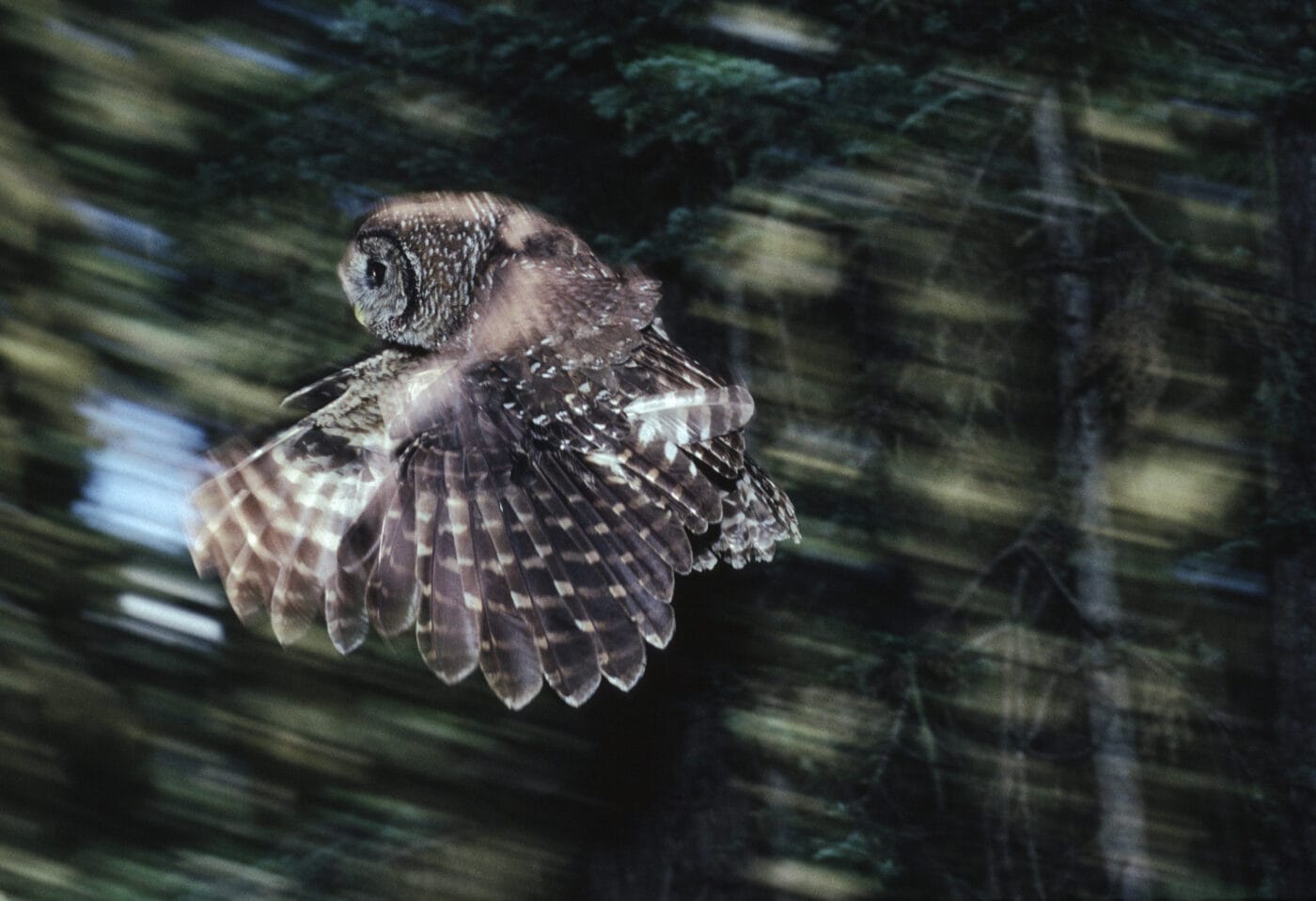 Northern spotted owls, pictured here in the Olympic National Forest in Washington State, were presumed extinct in the Canadian wild until a breeding pair was discovered in a B.C. valley slated for logging. A new provincial-federal nature agreement will work to protect species at risk in B.C., where no endangered species legislation currently exists. Photo: Bill Stevenson / Cavan

In the absence of endangered species legislation in B.C., the provincial and federal governments have announced a new ‘nature agreement’ that includes pilot projects to protect at-risk species. It starts with logging deferrals in habitat where the existence of a pair of breeding spotted owls, thought extinct in Canada, was made public in 2020

B.C. and Ottawa have struck a deal to defer logging in two Fraser Canyon watersheds that provide habitat for the last three spotted owls left in Canada’s wild — the first step in a bilateral nature agreement announced by the two governments on Thursday.

The nature agreement, aimed at strengthening conservation efforts in B.C., features pilot projects that will deploy “new approaches to protecting species at risk and enhancing biodiversity,” starting with immediate action to support efforts to recover the spotted owl, a chocolate brown raptor with distinctive white flecks.

That action includes logging deferrals for at least one year in the old-growth Spuzzum and Utzlius watersheds near Hope, in the territory of Spô’zêm First Nation, which last year asked the province to cease all logging activities in its territory to give the highly endangered owls a chance at survival.

“Spô’zêm First Nation stands proud as we have further shown that, with the right intentions, collaboration and productive dialogue great things are achievable,” Spô’zêm Nation Chief James Hobart said in a statement.

“This monumental step forward in assertion of our nation’s own title and rights could only have been achieved with government representatives who smashed through the status quo, tore down walls of mistrust, rolled up their sleeves and in the end were true to their word….”

Chief Hobart said the logging deferrals also reflect the provincial government’s commitment to 2019 legislation to implement the UN Declaration on the Rights of Indigenous Peoples.

The nature agreement will be developed over the next year, with the federal government providing an initial $2 million in matched funds for various, and as yet unnamed, conservation actions in B.C.

The two governments “will explore new ways to protect and restore habitat and strengthen ecosystem resilience to climate change,” according to a news release that also promised a long overdue updated Canadian recovery strategy for the northern spotted owl, a species found only in B.C., Washington, Oregon and northern California.

“This is something to celebrate,” Wilderness Committee protected areas campaigner Joe Foy told The Narwhal. “These are all really good, hopeful signs.”

The announcement follows a petition to federal Environment Minister Jonathan Wilkinson from the environmental law charity Ecojustice, acting on behalf of Wilderness Committee.

Ecojustice demanded that Wilkinson issue an emergency order under Canada’s Species at Risk Act to halt impending logging in the Spuzzum Valley, where three logging cutblocks had been auctioned off by the provincial government agency BC Timber Sales. Another five cutblocks were slated for impending auction.

One cutblock was logged prior to the petition, and BC Timber Sales built roads into two more cutblocks to facilitate harvesting.

Under the Species at Risk Act, Wilkinson can ask the federal cabinet to issue an emergency order on the grounds that spotted owls face imminent threats to their survival and recovery. An emergency order would allow Ottawa to make decisions to protect spotted owls and their habitat that are normally within the jurisdiction of the B.C. government, such as whether or not to allow logging in the Spuzzum Valley.

“I’m super relieved that we have a reprieve in the Spuzzum Valley and Utzlius Valley,” Foy said. “But we’re absolutely not out of the woods yet.”

Following decades of industrial logging in the spotted owl’s old-growth habitat, the raptor was presumed extinct in Canada’s wild until government biologists found a breeding pair with chicks in the Spuzzum Valley in 2019. Wilderness Committee only learned of the discovery last year, after Foy travelled to the valley to document the impact of logging.

Recovery measures for the spotted owl, which nests only in old-growth forests, preying on flying squirrels and packrats, will include a strategy for the reintroduction of captive spotted owls to the wild, according to the news release.

For more than 10 years, the B.C. government has funded a breeding centre for the owls in the Lower Mainland city of Langley, where eggs are hatched in incubators in a laboratory while a soundtrack of forest sounds plays in the background.

Two chicks hatched by the wild spotted owl pair were captured by government biologists and taken to the breeding centre, where 25 owls are housed in outdoor aviaries. Government biologists also planned to capture the third wild chick to raise it at the centre, which seeks to augment genetic diversity in the captive owl population. No captive birds have been reintroduced to the wild, despite repeated assurances from the B.C. government that it intends to release them.

According to a joint federal and provincial news release, the three spotted owls known to remain in the wild are nesting within wildlife habitat areas the B.C. government has designated for the species.

The news release also said there are more than 281,000 hectares of legally protected spotted owl habitat in the province of British Columbia, enough to support a population of 125 breeding pairs.

“They are making the argument that enough habitat has already been protected,” Foy said. “Wilderness Committee and Ecojustice say that obviously it hasn’t. It’s why species in southwestern B.C. that rely on old-growth forests are in such rough shape. Too much has been cut.”

“We need to stop cutting old-growth forests. Period. And then look at how we can repair the mess that’s been made.”

The B.C. government allows logging in 108,000 hectares designated as wildlife habitat areas for the spotted owl, as long as those areas are managed to ensure two-thirds of the land base retains suitable habitat.

It also permits timber harvesting in 75 per cent of the 51,000 hectares it has designated as “managed future habitat areas” for the owl, even though it could take hundreds of years for suitable habitat to re-grow.

It’s not clear how many hectares of current or future habitat areas for the spotted owl are included in the Spuzzum and Utzlius watershed logging deferrals.

Ecojustice lawyer Kegan Pepper-Smith said the nature agreement is “a step in the right direction” to ensure the spotted owl has a chance of survival and recovery.

But he said much more must be done to address the urgent threat to B.C.’s endangered species and the continuing loss of their habitats, noting that other species face extinction in the absence of provincial endangered species legislation.

B.C., with more biodiversity than any other province, has more than 1,300 species at risk of extinction. Unlike six other provinces, B.C. does not have legislation to protect endangered species.

The B.C. government’s about-face on legislation comes as scientists around the world warn we are witnessing the sixth mass extinction event in the planet’s four-billion-year history. As many as half of all species may be headed toward extinction in the next 30 years, with habitat destruction a leading cause of their demise.

The spotted owl has since 2003 been listed as endangered under the federal Species at Risk Act, a designation that requires Ottawa to take action to recover the population.

A 2006 federal recovery strategy for the spotted owl committed to producing an action plan within a year to identify the raptor’s critical habitat and activities likely to destroy it.

But B.C., which is responsible for developing the habitat action plan, hasn’t produced one.

Foy said the next year will involve hard work and will be fraught with dangers for the spotted owl in B.C.

“We’re down to three adults of this species,” he said. “Other species that live in the old-growth forest of southwestern B.C.  haven’t had nearly the research that spotted owls have had. There are a number of species that are in dire, dire shape because of logging of old-growth forests. What happens next is really important.”

“The devil will be in the details.”

Wilkinson said the nature agreement will build on collaborative measures already in place, including the Pathway to Canada Target 1 — a collaborative federal, provincial, territorial, Indigenous and local government forum which seeks to protect and conserve more of Canada’s nature — and the 2018 Pan-Canadian Approach to Transforming Species at Risk Conservation in Canada, which focuses on joint efforts to conserve multiple species and ecosystems rather than focusing on one species at a time.

“Now is the time for concrete action to protect natural ecosystems and halt biodiversity loss,” Wilkinson said in the statement. “We are working towards protecting 25 per cent of Canada’s lands and oceans by 2025 and supporting Indigenous leadership in conservation to get there.”

The nature agreement announcement follows a fall election campaign promise by the BC NDP to implement all 14 recommendations made by a strategic old-growth review panel, which called for a paradigm shift in the way the province manages old-growth and said all recommendations should be implemented within three years.

Among other findings, the panel said old forests are not a renewable resource and should be managed for ecosystem health.

Foresters Al Gorley and Garry Merkel, who headed the panel, recommended the B.C. government immediately defer development in old forests “where ecosystems are at very high and near-term risk of irreversible biodiversity loss.”

To view the original article published by The Narwhal click here. 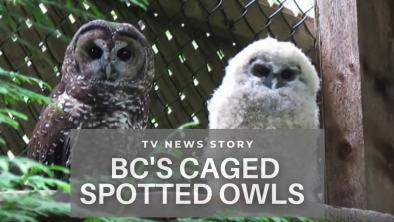 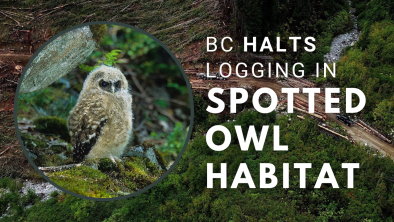