Time is over for compromising on habitat versus logging issue 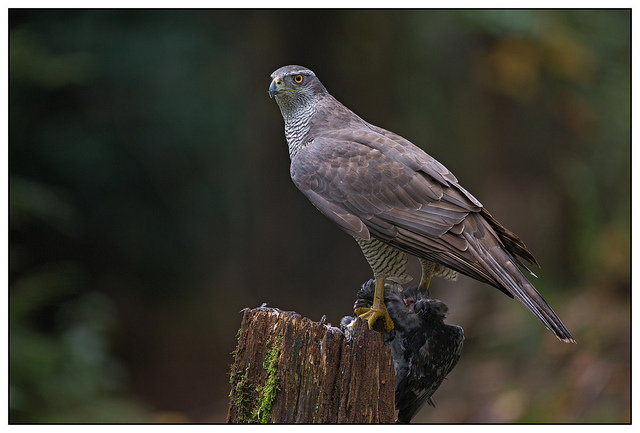 Plans to save the endangered northern goshawk in British Columbia have been shaped to reflect the interests of the logging industry, according to documents released under the Freedom of Information Act.

With more than 1,000 species endangered in B.C., 200 of which are listed under the federal Species At Risk Act (SARA), the province is supposed to be working diligently with Ottawa on recovery plans for those most in danger of vanishing.

The spotted owl, mountain caribou and northern goshawk are three species that are arguably of greatest concern in B.C., and under SARA the province is required to take appropriate action to save them.

Despite that, briefing notes obtained under FOI show the province has been reluctant to set aside northern goshawk habitat if it means restricting logging.

Under SARA, recovery plans are supposed to be based on science, without consideration for what the economic impact might be. The thinking is that by the time you get down to about a dozen spotted owls, as we are now in B.C., or to 162 goshawks, the time for compromising over habitat is over.

But the provincial government doesn’t see it that way.

“The federal strategy will likely identify critical habitat polygons that include a significant amount of coast forest,” states the briefing note. “Significant gaps are anticipated between the critical habitat proposed by the federal government and existing provincial protection measures.”

It goes on to say the B.C. government has been working “in co-operation with forest licensees and private managed forest land holders … conducting analyses to determine the socio-economic impact of managing different levels of goshawk habitat retention.”

Gwen Barlee, a director of the Wilderness Committee, said goshawks, spotted owls, caribou and other species in B.C. are at risk because too much of their critical habitat has been lost over the past century, mostly to logging. And she argues it is wrong to give logging companies a seat at the table now that the last desperate plans to save those species are being put together.

“I’m appalled. The B.C. government will say, ‘Of course we consult stakeholders.’ But this is not consultation. This is a dramatic reworking of the very guts of recovery strategies that are supposed to be protecting species at risk,” she said. “What you are seeing is an egregious degree of interference by forestry companies regarding the science of recovery strategies. Let’s face it, forest companies don’t want to see habitat set aside for the northern goshawk any more than they want to see habitat set aside for mountain caribou or the spotted owl.”

Ms. Barlee said B.C.’s goshawk recovery strategy “is masquerading as a scientific document when really what it is is a document that is partly written by the logging companies. That is fundamentally dishonest and at the end of the day [that approach] will never recover a species at risk, because it hasn’t identified the habitat the species truly needs to recover.”

In the 1980s and 90s a battle to save the spotted owl erupted in Oregon, where bumper stickers saying “Save a Logger, Eat an Owl” became popular in resource towns. Despite the grassroots popularity of that slogan, federal and state authorities were forced by court rulings and the U.S. Endangered Species Act, to follow scientific advice and set aside enough habitat for the birds to survive. Logging on federal lands soon dropped by 90 per cent.

In B.C., the government failed to follow suit, and just kept on logging. Now a survival crisis is looming for the goshawk, the spotted owl and the mountain caribou, all species that rely on old-growth forest.

If those species are to survive, B.C. must abandon its bumper-sticker mentality and embrace science over logging interests.