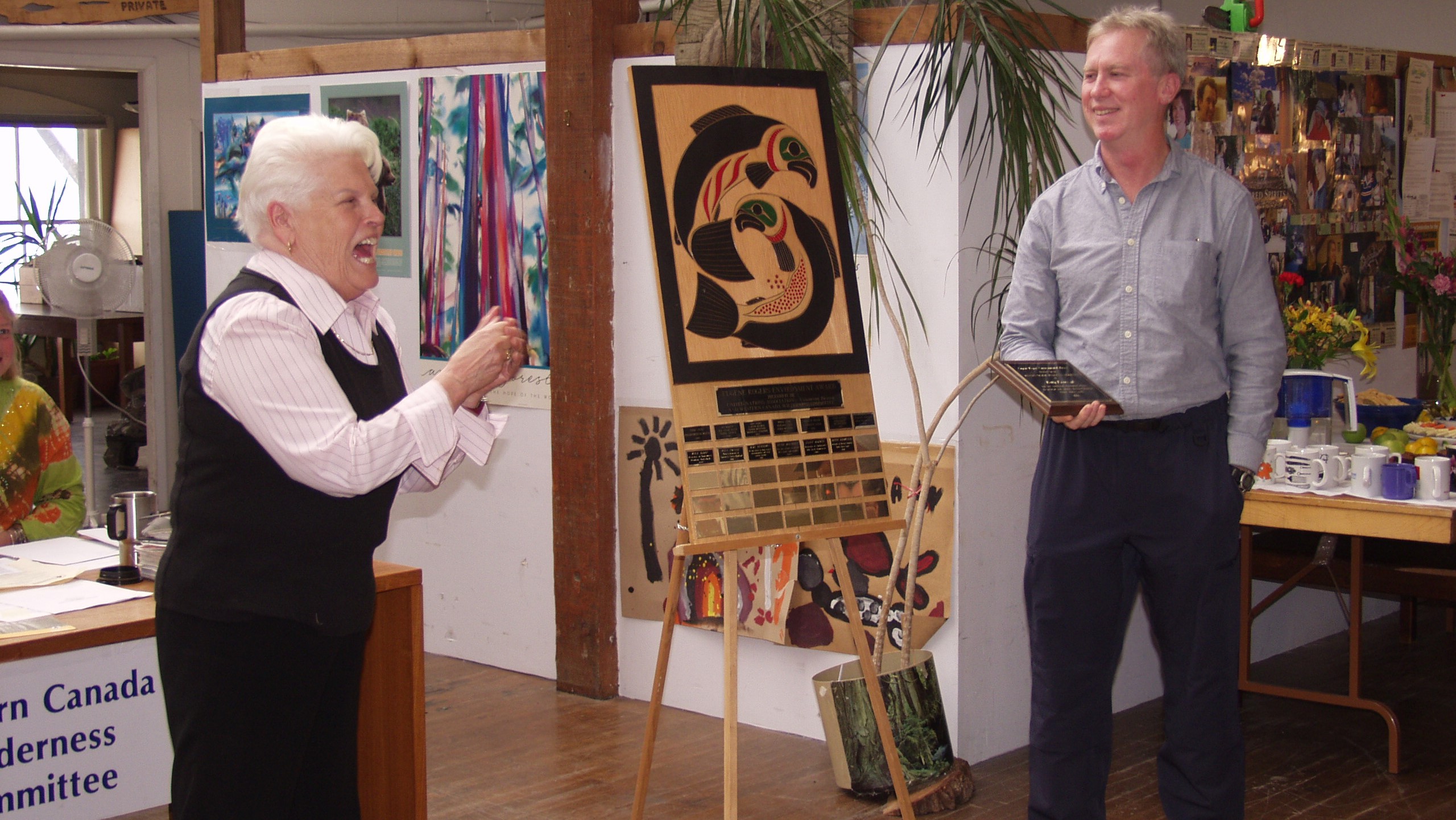 On January 16, 1992, the environmental movement was saddened to learn of the sudden death of Eugene Rogers, a New Westminster, BC resident and conservationist who worked tirelessly for the protection of wild places and wild salmon. Rogers was a leading member of the Steelhead Society, worked with the BC Wildlife Federation and served as treasurer for the Outdoor Recreational Council. The Wilderness Committee first met him as one of the leaders of the ‘Save the Stein Coalition’ in 1981. In his final months, we saw Eugene working to put an end to Alcan's plans to dam the Nechako River.

Those of us who had the privilege of working with Eugene remember his dedication and unique ability, through example, to recruit and build leaders in the conservation movement. Many of his triumphs will go unsung except to the steelhead and other salmon that will embody his life’s work when they return to protected riverbanks to spawn. He was a true "gumboot" activist.

In memory of Eugene Rogers and the tradition of hard work he brought to the conservation movement, the Wilderness Committee presents the Eugene Rogers Award annually to a conservationist who has worked exceptionally hard to protect nature and who has made an outstanding contribution towards protecting wilderness and fish habitat. The award is in the form of a plaque, and it is accompanied by a $1,000 prize. The recipient's name is also placed with former recipients on a wood carving of spawning salmon by Salish artist William Watt that hangs in the Wilderness Committee offices.

Past recipients of the Eugene Rogers Award:

1992 – Terry Jacks with Environmental Watch of the Sunshine Coast for his work to stop pulp mill pollution in Howe Sound.

1995 – Danny Gerak, commercial fisher and fishing lodge owner, who with the help and support of his family and the Katzie First Nation has been a tireless defender of the fish and wildlife habitat of the Upper Pitt River Valley.

1996 – Maureen Fraser, small business owner, for her persistence and strength at the community level to help in the progress towards preservation of the ancient rainforests in Clayoquot Sound.

1997 – John Clarke, mountaineer, for his work to bring hundreds of people into the Stoltmann Wilderness to see what might be lost if preservation does not prevail. John passed away January 23, 2003.

1998 – Marion Parker, dendrochronologist, for his lifelong efforts at ancient tree research in British Columbia. Marion passed away in August 1999.

1999 – Will Koop for his work to protect Vancouver’s drinking watersheds.

2000 – Will Paulik for his unfaltering work in helping protect the Fraser River. Will passed away January 2, 2001.

2001 – Mae Burrows for her outstanding work in the environmental and labour movement, including building bridges between workers and environmentalists.

2003 – Clint Marvin for his efforts to preserve and protect the Fraser Valley's tallest trees in the Elk Creek Rainforest.

2006 – Dr. Tracy Lyster for mobilizing the citizens of Mission, BC to protect over 3,400 acres of environmentally sensitive land in rural Silverdale and Silvermere Island.

2008 – Alexandra Morton for her work to inform the public about the threats to BC’s wild salmon by open-net-cage salmon farms.

2009 – William (BJ) Alexander for his work to protect St’át’imc Nation Territory in accordance with the St’át’imc Land Use Plan and to encourage youth to increase their presence on the land.

2010  – Dr. Mike Pearson, fisheries biologist, for his work in BC's Lower Mainland to protect the habitat of an endangered species of freshwater fish – the nooksack dace.

2011  – Chief Marilyn Baptiste of Xeni Gwet'in for her work on behalf of the Tsilhqot'in Nation to protect Teztan Biny (Fish Lake)  from being drained and filled in as a result of the proposed Prosperity Open-pit Copper Mine.

2013 – Ken and Arlene Boon, for their long-time efforts to protect the Peace River Valley from the proposed Site C dam.

2014 –  Don Gillespie, for his many years of volunteer labour to preserve endangered wilderness areas in southwest BC. Don passed away June 13, 2021.

2015 – John Snyder, for his remarkable efforts to protect the Comox Valley from the proposed Raven Coal Mine on Vancouver Island.

2016 - Valerie Langer, for her decades of dedicated work to preserve and protect the ancient rainforests of the Pacific coast.

2017 - Grand Chief Stewart Phillip and Joan Phillip, for their opposition of pipelines, fish farms and Site C dam. In addition, the couple is awarded for their part in raising awareness on the impact of climate change and for standing side by side with First Nations leaders.

2018 - Reuben George and Eugene Kung, for their leadership in the Tsleil-Waututh Nation Sacred Trust Initiative to stop the Trans Mountain pipeline expansion and tanker project.

2019 - Kanahus Manuel, for her leadership in organizing in Secwepemcùl'ecw communities in defence of their territories against the threat of man camps and oil spills. Kanahus and the Tiny House Warriors are bravely living on the frontlines enduring cold winters, hostile neighbours and police violence.

2020 - Camp Morningstar, for their leadership in establishing a cultural and education camp at the site of a proposed frack sand mine in Hollow Water First Nation territory, Manitoba. Click here for a video of the award presentation.

2021 - Elder Bill Jones, for standing up for endangered forests and being there to provide guidance, support and friendship to everyone who is working to protect them. His dedication is surpassed only by his kindness.

2022 - Devon Page, for his years of dedicated legal work to preserve and protect at-risk wild species and places in Canada.